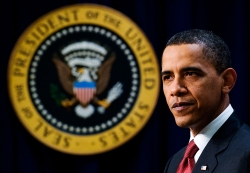 Barack Obama speaks during the closing session of the Forum for Workplace Flexibility at the Eisenhower Executive Office building. The forum focused on stress and workplace flexibility.   (SAUL LOEB/AFP/Getty Images)

Stress is coming at working people from every direction these days, whether they're employed, under-employed, or jobless.

The need for more flexibility in the workplace to reduce family stress was the focus of a recent White House conference, and it comes as a belated recognition of the declining quality of family life brought on by both parents trying to straddle their family and work responsibilities.

While the conference discussed a number of ways to make workplaces more tuned in to the needs of families, it will be revealing to see how many employers actually consider alternatives like more flexible working hours. Such changes would require a vast transformation of the way that Corporate America views its workers and their children.

Up until now, the prevailing corporate attitude—with some exceptions—has been that international competition demands that workers completely re-shape their lives to the requirements of the market, rather than have the economy re-structured to meet the most basic needs of even society's most vulnerable members, its children.

For decades prior to the recession, American workers toiled longer hours annually than any other workers in the advanced world, wrote Juliet B. Schor in The Overworked American :

U.S. manufacturing employees currently work 320 more hours [per year] -- the equivalent of over two months -- than their counterparts in West Germany or France. . . .  [Compared to 1969 in the U.S.,] the average employed person [in 1989 was] on the job an additional 163 hours, or the equivalent of an extra month a year.

The differential, according to Sylvia Ann Hewlett's Child Neglect in Rich Nations, written for the United Nations Children's Fund, is directly tied to the much stronger union movement in Western Europe:

Relaxed European attitudes towards the work week have been greatly facilitated by a powerful trade union movement that has kept the issue of shorter hours at the top of the agenda throughout the postwar period.  In bad economic times, unions have resisted the inevitable pressure for longer hours, arguing that a shorter work week actually combats unemployment by spreading the work around.

Pressures on American workers--facing stagnant or falling wages since 1973--intensified the need to work longer hours than even the Japanese, whom Americans once commonly mocked as workaholic automatons. But Americans have become the new automatons under their deteriorating power to protect time off the job and maintain decent wages. As Lawrence Mishel, Jared Bernstein, and John Schmitt documented,

This clearly has drastically reduced the amount of time that American parents can spend with their children, as Noam Chomsky points out:

Stanford University economist Victor Fuchs estimates that U.S. children have lost 10-12 hours of parental time per week between 1960 and 1986. Total contact time dropped 40 percent in the past generation [emphasis added], leading to deterioration of parent-child relations and family identity and values…

If workers are now among the 15 million unemployed, they have much higher chances of both physical and psychological disorders, from increased heart attacks to depression, as documented in a number of studies (as discussed here , here, here, here, and here in Don Peck's exceptional Atlantic article on unemployment.)

Prolonged layoffs represent a profound blow to their victims' sense of hope about their lives. "They [layoffs] are the opposite of life-giving; they literally deplete life," declared Kim Carmon, organizational psychologist at the University of Michigan.

UNDER-EMPLOYED: MORE SQUEEZED THAN EVER

If you are fortunate enough to be among the working, your hours and take-home pay may well have been cut, as the average hours worked by Americans plummeted suddenly from the highest in the world to just 33 hours during the recession. The cut in your pay envelope intensifies every financial pressure.

Further, employers have engaged in the most widespread, unilateral reductions in hourly wages and salaries since the Great Depression. With only one out of eight workers having union representation, there is no one to speak up for their interests.

With many workplaces drastically downsizing their workforces, this translates into much heavier workloads for those who remain--yet many find their pay reduced.

CAN MANAGEMENT BE TAUGHT FLEXIBILITY?

The leverage of management to ratchet down wages--and demand more from workers in accepting longer or shorter hours, different shifts, and more family stress--comes down hard on the under-employed. Moreover, it is likely to worsen without profound changes in the economy, argues former labor secretary Robert Reich:

The only way many of today’s jobless are likely to retain their jobs or get new ones is by settling for much lower wages and benefits. …

Among those with jobs, more and more have accepted lower pay and benefits as a condition for keeping them. Or they have lost higher-paying jobs and are now in new ones that pay less. Or new hires are paid far lower wages than the old. (In January, Ford Motor Co. announced that it would add 1,200 jobs at its Chicago assembly plant but didn’t trumpet that the new workers will be paid half of what current workers were paid when they began.) Or they have become consultants or temporary workers whose pay is unsteady and benefits nonexistent.

Given Corporate America's virtually unbridled power and its indifference to the plight of its workers and their kids, flexibility is likely to be a quality management learns slowly—only after extreme armtwisting by workers and government.