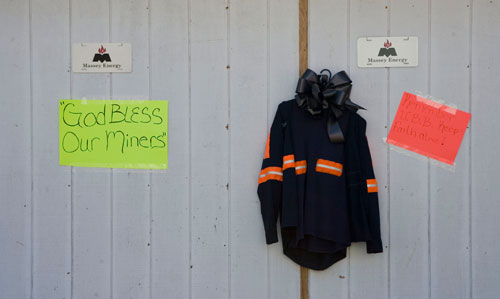 Signs and a coal mining uniform are placed in memorial for deceased Massey miners in Whitesville, West Va., on April 11, 2010.   (Photo by Kayana Szymczak/Getty Images)

Yesterday, when President Obama visited West Virgnia to eulogize the 29 miners who perished in the Upper Big Branch mine disaster earlier this month, many were expecting a righteous denunciation of corporate greed and institutional inertia.

The mining company, Massey Energy, has racked up thousands of health and safety violations at the Upper Big Branch mine since 1995. Government inspectors were constantly citing the mine for accumulations of water and coal dust, absent and defective lifelines, poor airflow, excessive methane, defective and improperly calibrated gas meters, and other serious safety hazards. Miners trudged to work in water up to 48 inches deep, which inspectors described as a drowning hazard. Inspectors observed drifts of combustible coal dust up to 24 inches deep. (And—surprise surprise—the mine was not unionized.)

But although Obama said the U.S. government is morally obligated to prevent future mining tragedies, instead of railing against injustice, the president focused on comforting the community with prayer and celebrating the deceased miners as living embodiments of the American Dream: brave, hard working, community-oriented, and devoted to their families.

"If any comfort can be found, it can, perhaps, be found by seeking the face of God, who quiets our troubled minds, mends our broken hearts, and eases our mourning souls," the president said.

The president said that the miners and their families "knew the risks"—his point being that they were brave and stoic. The cliche about knowing the risks obscures what was happening at the mine. The miners knew there were risks over and above the intrinsic dangers of coal mining and nobody did anything about them. One of the late miners, Josh Napper, was so worried about the poor ventilation that sent him home from work on April 2 that he wrote a goodbye letter to his mother, financee, and baby daughter.

In 2005, CEO Don Blankenship sent a memo to all deep mine superintendents, including those at Upper Big Branch, ordering them to place production ahead of safety:

If any of you have been asked by your group presidents, your supervisors, engineers, or anyone else to do anything other than run coal . . . you need to ignore them and run coal. This memo is necessary only because we seem not to understand that the coal pays the bills.

That memo surfaced during litigation over a lethal 2006 fire at Massey's Aracoma mine.

On Sunday, Obama didn't address responsibility for the miner's deaths until 15 paragraphs into his speech: "We cannot bring back the 29 men we lost. They are with the Lord now. Our task, here on Earth, is to save lives from being lost in another such tragedy. To do what must be done, individually and collectively, to assure safe conditions underground. To treat our miners the way they treat each other—like family," the president said.

When mining disasters happen, it's too easy to romanticize the bravery of the miners while ignoring the cowardice of the executives who sent them to their deaths. In his eulogy, Obama did just that.