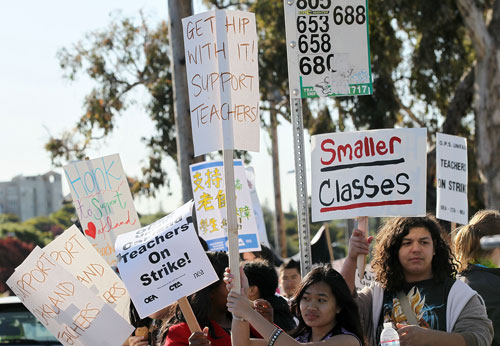 Teachers and students hold signs as they protest during a one-day strike outside of Oakland High School April 29, 2010.   (Photo by Justin Sullivan/Getty Images)

Oakland teachers are walking the picket line today at schools throughout the Oakland Unified School District.

The one-day strike was called for following a labor contract imposed by the Oakland School Board last week. Late Tuesday, the Oakland Unified School District requested a meeting next week to discuss a return to the bargaining table.

“We will do that, but the strike is still on,” said Betty Olson-Jones, president of the 2,800-member Oakland Education Association, which represents 2,800 teachers, counselors, nurses, psychologists, librarians, speech pathologists, social workers and substitute teachers in K-12, Early Childhood and Adult Education. The district is spending too much on consultants, losing teachers to better-paying districts, and cutting back on resources for its 37,000 students, she said.

"If school boards and administrators refuse to make our classrooms the top priority, or to invest in students and teachers right now, our communities will suffer for years to come. In this time of deep state budget cuts, this district has chosen to spend millions for outside consultants instead of our classrooms," Olson-Jones added.

The district faces an $85-million budget deficit and dwindling resources.

Troy Flint, a district spokesman, said cuts are coming. At least 50 teachers and 100 employees in the central office could be laid off.

Gary Yee, president of the Oakland Board of Education told the New York Times that the contract was imposed to give teachers “a clear picture of the district’s financial situation.”

Olson-Jones defended teachers on KQED radio, saying “The reason we want that raise is not because we’re greedy. You don’t go into teaching because you want to make a lot of money, you go in to it for the love of the children."

She added, "When we are in a district that is at the bottom of 17 districts in Alameda Country, we can’t even keep teachers, we have a 20 percent turnover. We’re just saying ‘bring us to the median so we can at least retain teachers who come here instead of losing them.’ ”

Oakland teachers point out that the district spends nearly 20 percent of its budget on consultants, subcontractors and related outside vendors, which is about twice the rate of all other Alameda County school districts.

In 2003, Oakland Unified was bankrupt and the state bailed it out with $100,000. The state took over the district until OUSD was able to show it had a handle on the budget and on student academic performances, which had gone into the toilet.

This is the first year the district has been in the black.

Olson-Jones says she is hoping the strike will put pressure on the district as well as the state to restore funding to the teachers. “We will go to membership May 3 and ask for authorization for further actions. Short-term disruption is worth long-term stability."

She said some teachers are holding other jobs just to get by.

“I have a teacher in office who is working three jobs in order to stay here. We feel we had to make a stand. We’ve got to stop the way that business is done,” she said.