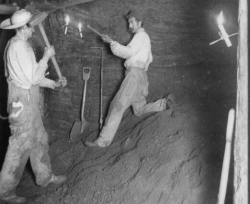 Time and time again, inspectors found that miners at the Big Branch coal mine in West Virginia were trudging through inches-deep drifts of combustible coal dust. The mining company, Massey Energy, paid the fine, stalled through endless procedural challenges or just ignored the citation all together. The bottom line was that the dust kept piling up...until disaster struck.

In late April, the federal Occupational Safety and Health Administration unveiled a new program to get tough on the worst offenders, the Severe Violator Enforcement Program (SVEP). Beginning in June, the SVEP will step up enforcement against employers that have shown "indifference" to the safety of their workers through "willful, repeated, or failure-to-abate violations."

Combustible dust violations will be a high enforcement priority for SVEP, as will amputation hazards, unsafe excavation practices, and silica dust exposure.

Fines for safety violations have been increased only once in the last 40 years. Needless to say, they haven't kept pace with inflation.

OSHA, which is part of the Department of Labor, plans to increase the costs of non-compliance. Right now, the stiffest possible penalty for a serious violation, i.e., an infraction that could kill or seriously injure someone, is just $7,000. The current maximum penalty for a willfull violation is $70,000. Under the SVEP, the average penalty for a severe infraction will rise from about $1,000 to $3,000-$4,000.

Still a pretty trivial penalty for risking someone's life or limb, but it's a step in the right direction.