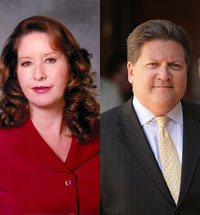 Congresswoman Loretta Sanchez and Former Assembly Speaker Bob Hertzberg announced this week that they were canceling their UC Berkeley commencement speeches to honor a low-wage workers' boycott at nine University of California campuses.   (Photo courtesy of the AFSCME)

As college and university commencement season gets underway around the country, there’s going to be some last-minute scurrying to fill in slots left vacant by keynote speakers honoring a boycott called by low-wage workers and student groups at nine University of California campuses.

State Senator Gloria Romero, (D-Los Angeles), chair of the state's Education Senate Committee has become another in a growing list of speakers who will not be giving commencement speeches at UC ceremonies. Romero was to have delivered the keynote address at the UC Berkeley Latino Student graduation ceremony this Saturday, May 15.

The speakers' boycott was called this month by the American Federation of State, County and Municipal Employees (AFSCME) and supported by other unions because of mandatory furloughs and reductions in hours, layoffs and pay cuts of 4 to 6 percent in take-home pay for low-wage service workers in the UC system.

Last year, AFSCME Local 3299, which represents about 20,000 UC workers, including hospital technicians, campus custodians and food service workers, had celebrated a new contract that brought some decent gains in the contract to help workers out of poverty.

But Lakesha Harrison, president of Local 3299,  tells Working In These Times: "By April, this furlough plan came before the people even saw their first raise. So we’re knocking people back into poverty even further than they were."

UC reasoned that $7 million would be saved through work hour reductions for members of the Local. However, the lowest paid workers, many of whom are immigrants, are dealing with pay cuts, while $9 million in increases have been gained by UC executives.

"Layoffs and reduction in hours are only the tip of the iceberg. UC executives are now proposing massive cuts to our retirement. We may be facing a double whammy - a depletion of our savings now and a gutting of the income we were counting on for our future,” Harrison said.

"My family roots are in organized labor and, in good conscience, I cannot and will not cross the picket line to speak," Sanchez stated.

More speakers are expected to cancel their appearances.

Dwaine Duckett, UC Vice President for Human Resources denounced the union's campaign in a statement saying, "Graduations are about students — their achievements, family support and sacrifices — not the advancement of [the union's] ideological and political agendas," he stated.

Romero called it an "honor" to have been invited by students to offer the commencement address and that the ceremony was "particularly inspiring for me – to congratuate Latino and Latina students who had the "ganas" (the will) to fight for the American Dream." She continued:

... What an irony I would have seen: on one hand, students in robes celebrating the overcoming of obstacles and staking their claim in the American Dream; on the other hand, I would have seen Latino workers—perhaps their own uncles and aunts, holding picket signs asking this internationally-acclaimed university to simply pay them a living wage so that the graduates’ younger hermanitos (brothers and sisters) could one day attend the same university!

I ask the Chancellor to heed this call and correct the misplaced priorities at the university— one of cutting classes and the lowest wage workers serving those students, while paying out millions in executive compensation and perks.

According to Harrison, some workers whose cuts are concentrated in the summer will lose 20 percent of pay over three months. “What’s a decent contract if it’s violated?” Harrison asked.

“The pay cut has forced me to use up all my savings, my life insurance money, and now I have nothing left. I can barely afford to pay my rent, and I’m having trouble buying my food and medicines. The cuts may seem small, but they are causing a big negative impact for my family,” said Rebecca Mulay, a custodian at UC Riverside.

The boycott has also been called by the Union of Professional and Technical Employees; CWA Local 1 (UPTE 1) which represents UC research support and technical workers. Two UC service workers Maricruz Manzanares, a custodian and Abel Salas, a gardener, and members of AFSCME Local 3299 joined a student hunger strike at UC Berkeley which began May 3 and ended last night (Wedneday May 12).

The strike was called to make several demands, including that the UC Berkeley administration denounce changes to Arizona's immigration laws. SB1070 targets undocumented residents and gives carte blanche to police officers to question anyone who may "look" suspicious.

The students have also called on UC administrators to hire back laid-off workers and restore hours to existing workers, among other demands.