What Sank the Deepwater Horizon? 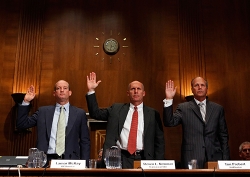 Who's responsible? BP America Transocean and Halliburton presidents are sworn in before testifying on Capitol Hill about the Deepwater Horizon explosion and oil spill in the Gulf of Mexico on May 11, 2010, in Washington, D.C.   (Photo by Chip Somodevilla/Getty Images)

Executives from BP, Transocean, Ltd., and Halliburton trudged to Capitol Hill Tuesday to attempt to explain why the Deepwater Horizon oil rig burned, exploded, and sank off the coast of Louisiana, killing 11 workers.

The general consensus: We don't know, but we're sure it was the other guys' fault.

An oil rig has so many overlapping layers of ownership and supervision that it's easy to shift the blame to someone else. BP holds the oil lease but rented the rig from its owner, Transocean, Ltd. Transocean was largely responsible for operating the rig. Transocean subcontracted out cement work to Halliburton.

All three companies are still investigating the cause of the accident. Everyone agrees that there was a two-part failure: First, the cap on the well blew out. Then, the blowout protector (BOP) failed to activate.

"The most significant clue is that the events occurred after the well construction process was essentially finished," Transocean President and CEO Steven Newman, a petroleum engineer by training, told the Senate Committee on the Environment and Public Works.

Three days after Halliburton temporarily sealed off the well, there was a "sudden and catastrophic failure" of either the cement or the casing or both, Newman explained.

The explosion was just the first phase of the catastrophe. For as yet undetermined reasons, the blowout protector (BOP) on the well failed. In the event of an emergency, a blowout protector is designed to slice and seal pipes with razor-sharp blades and then surround the pipe like a donut to squeeze it shut. The Deepwater Horizon's BOP failed to activate after the exposion.

Newman speculated that the BOPs might have been damanged by the impact of the initial explosion or damaged by debris. This is a convenient hypothesis from Transocean's perspective because, as the owner of the BOP, the company was responsible for keeping it in good working order. If it turns out that the device was damaged by an explosion, then it would be Halliburton's fault.

"We don't know yet precisely what happened on the night of April 20th, but what we do know is that there were anomalous pressure test readings prior to the explosion, " Lamar McKay, chairman and president of BP America testified.

Tim Probert, Halliburton's top health and safety officer, blamed the blowout protector. Certainly, if the BOP had worked, the oil wouldn't have spilled—but that's a separate question from whether Halliburton's cement job was adequate. Probert admitted under questioning by Sen. Barbara Boxer (D-Calif.) that Halliburton tested the seals on the plug, but not the material itself. Halliburton recommends that the cement be tested, but they ultimately follow the directions of the well owner, i.e., Transocean.

According to Probert, the Minerals Management Service (MMS), the government agency that oversees offshore drilling, doesn't require this kind of testing.

During the hearing, it was revealed that MMS exempted BP from other safety requirements. "BP said in its oil exploration plan there'd be no significant impact on any natural resources. And MMS went along," Boxer said.

Boxer said she was working on legislation to separate the safety oversight functions of MMS from its role as an administrator of oil leases. There's an inherent conflict of interest to MMS's dual role as tax collector and safety monitor. In other words, the agency's mandate to collect oil royalties could conflict with its duty to protect workers and the enviornment.