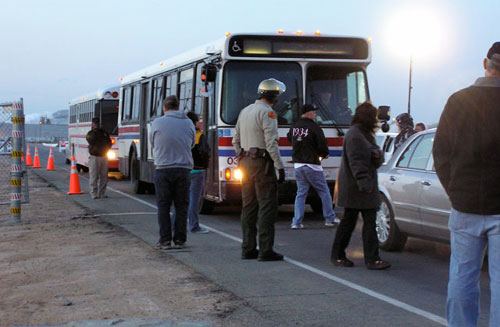 Locked-out Borax mine workers face off with bus loads of replacement workers leaving the Rio Tinto facility in April 2010.   (Photo by R.M. Arrieta)

A four-month labor dispute in the Mojave desert town of Boron, Calif., has ended with a victory for 570 RioTinto Borax miners who were locked out of the Rio Tinto mining facility for 107 days.

After battling Rio Tinto, one of the world’s largest mining companies, in what many called a “David vs. Goliath” fight, the miners emerged from negotiations Saturday May 15 with “a fair contract,” said Chuck Kennedy, recording secretary for the International Longshore and Warehouse Union Local 30 negotiating team.

Workers, 75 percent of whom approved the agreement, will head back to their jobs on May 24. The six-year pact includes a 2.5 percent yearly wage increase; workers keep their protections against discrimination and favoritism in promotions, shifts, scheduling and overtime; and the company cannot convert full time jobs into part-time temporary jobs. Current workers will get pensions, and new workers will get 401(k) plans with a company match.

Dean Gehring, general manager of Boron Operations,  said: “We have reached a fair agreement that allows us to improve work practices and productivity so we can keep the business competitive throughout the life of the operation, potentially another 70 years.”

The British-Australian-owned Rio Tinto plant in Boron supplies 42 percent of the world's borates, which are a vital component in industrial and high-tech products. The company locked out the workers in Boron on January 31 after they voted down a giveback-packed contract from Rio Tinto. According to the ILWU, Rio Tinto in 2009 made nearly $5 billion in profits, despite a worldwide recession.

After workers were locked out, scores of unions supported the workers, including the Los Angeles County Federation of Labor, which represents over 350 unions and almost a million workers. Dozens of small businesses from hotels to restaurants lined up behind the locked out workers.

The workers maintained a steady presence at the gate entrance of Rio Tinto for the entire time they were locked out, seven days a week, 24 hours a day, in the rain, the wind, the cold and the heat. (Watch my Working In These Times audio slideshow about the lockout here.)

“Local 30 President Dave Liebengood, the negotiating committee and all the members deserve credit for standing up and sticking together to make this victory possible,” stated ILWU International President Bob McEllrath who joined the final stage of contract negotiations.

Terri Jud, a loader/operator at the plant, has worked there for 13 years. “I’m third generation out there. My grandfather came out there in the 1940s, he retired from here in 1975, and my father worked here.," she said in an earlier interview with In These Times before the settlement. “We have so many foreign-owned companies in this country. They think they can come in and pretty much treat us any way they want. I think American workers are getting tired of the corporate greed.”

“With a union that had a reputation for being a strong and militant union, [to fail] would have had massive implications for workers everywhere,” said Craig Merrilees, ILWU spokesman. He added he was particularly struck by the tenacity and drive of the workers. “There was never a time when workers came to the union hall and said they wanted to give up," Merrilees said. "That never happened. Here we are in the middle of a recession and you’ve got people really staying strong. That was really heartening.”

The workers paid a heavy price. Some workers lost their homes and vehicles. Others left the area for jobs elsewhere.

“Young families were probably impacted the most,” Kennedy said. But many were able to persevere. “All the other unions were donating money to the AFL-CIO for hardship so people wouldn’t lose their homes or get a disconnect. The food was coming in. We were picking up groceries every week out of the union hall,” Kennedy said.

The workers had both local and international support. They had help paying utilities, health insurance, car payments and mortgages. A volunteer group of doctors and nurses and other healthcare professionals held a free medical clinic in Boron. The local credit union “let workers slide for three months” on house and car notes. Teamsters delivered at least $30,000 worth of food collected by LACFL/AFL-CIO and other unions and supporters throughout California. Protesters harassed company executives from Boston to Australia to London and even protested a stockholders meeting in London.

"From the day these workers were locked out by this giant foreign corporation, we told them that we—the LA labor movement—would be their family and that families take care of each other,” Maria Elena Durazo, executive secretary-treasurer of the Los Angeles County Federation of Labor told the California Chronicle.

“It’s an amazing outcome. We beat them,” said Kennedy. “It’s a new age for labor.”