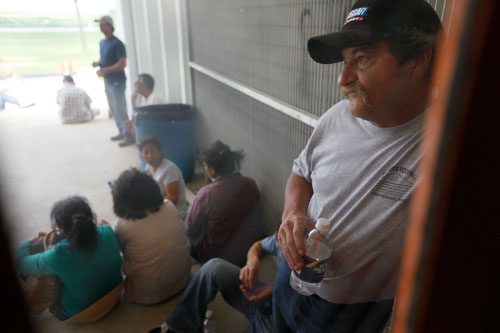 Grant Gaudet waits with other fishermen who have been recruited to help with the clean-up of the massive Gulf of Mexico oil spill, on May 2 in Boothville, La.   (Photo by Scott Olson/Getty Images)

Some fishermen hired by BP to clean up spill oil say they've become ill after being exposed to oil and dispersant without proper personal protective equipment.

Several south Louisiana fishermen working on the cleanup told the LA Times that they had developed headaches, coughing, nausea, and other symptoms. The workers said they'd been working without facemasks or gloves.

BP spokesman Graham McEwen told the Times that he was not aware that any workers were getting sick.

Yesterday, 125 fishing boats working off Breton Sound in Louisiana were called off the job after workers on three separate boats reported nausea, chest pain, and other symptoms. One worker had to be evacuated by air ambulance and two others were driven to hospital, according to the U.S. Coast Guard.

Rep. Charlie Melancon (D-La.) wants the Department of Health and Human Services to set up mobile clinics for clean-up workers and send the bill to BP. Melancon outlined the proposal in a letter to Health Secretary Kathleen Sebelius. As Melancon explained in the May 19 letter, workers are being exposed to hazardous materials on a daily basis and many are hours away from the nearest clinic.