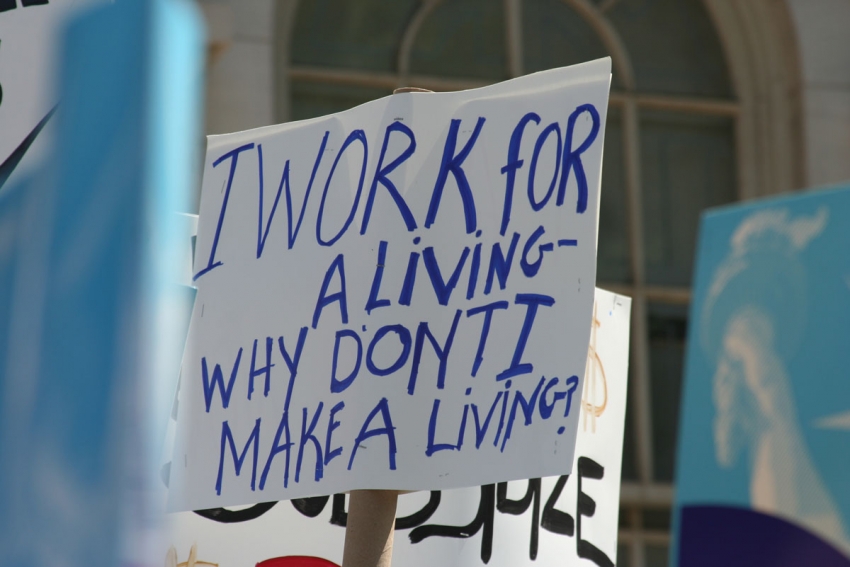 The Living Wage NYC campaign was launched May 25 in Bronx, N.Y.   (Photo courtesy of livingwagenyc.org)

In a city starkly divided between the haves and have nots, community activists are demanding an honest day's pay for New Yorkers who work at businesses profitting on the taxpayers' dime.

Activists representing low-income communities are rallying behind legislation that would boost the wage floor for workers at city-subsidized projects. The pending bill would set the minimum pay at $10 per hour for workers at development sites that benefit from city financial support.

That essentially covers any new development project receiving a city tax break or subsidy, from malls built with municipal tax credits to “redevelopment” schemes in gentrifying neighborhoods. Employers would also have to offer health insurance or pay an extra $1.50 per hour, and the wage would grow with a periodic cost-of-living adjustment.

If the legislation finally passes the City Council (previous attempts at legislating a living wage have foundered), it could be one of the most comprehensive fair-wage policies in the country.

The opposition says the mandate would deter developers. Mayor Michael Bloomberg dismissed the bill on Monday as prohibitively costly for corporations. "It's a nice idea but is poorly thought out and will not work," he told the New York Daily News. "The economics don't work if you have to pay more."

True, the economics don't work--unless you think it makes sense to pay sales clerks, cashiers and janitorial workers enough to live on. Retail work, the city's largest source of low-paying jobs, relegates legions of New Yorkers to poverty-level wages and leaves them vulnerable to exploitation. A 2008 report by the Fiscal Policy Institute found that 44 percent of retail workers earned less than $10 an hour. And these weren't just teenagers looking for extra spending cash:

The vast majority—78 percent—are 25 years or older, and half are 35 years or older. Four out of five work fulltime. In many cases, their earnings are vital to their families’ well being. In families with children, retail workers’ earnings contribute on average 56 percent of the family’s earned income, and more than a third of these workers are their family’s sole provider. Ninety thousand children in the city have parents employed in retail.

Reflecting the low-income population of the city overall, people of color make up most of the retail workforce, and about half are immigrants. They're especially vulnerable to common workplace abuses, “including failure to pay the minimum wage and overtime pay, discrimination against women, underpayment of undocumented immigrants.”

On Bloomberg's rejection of the living wage proposal, Paul Sonn, legal co-director of the National Employment Law Project, reflected on the Mayor's idiosyncratic approach to regulation:

One can understand the billionaire mayor being cautious about regulating business.  But his caution is plainly selective (witness his innovative interventions to regulate everything from restaurant menu calorie counts to guns). And around promoting decent jobs for the city’s low-income communities, he clearly had a blind spot.

The reality that urban job growth is concentrated in low-wage industries is hollowing out the middle class that cities need to thrive.

John Petro of the Drum Major Institute said that the growth of the retail industry poses a “threat to the city's economy”—one that city tax dollars should have no part in fostering.

“This bill really does challenge the status quo of how development is done in New York City,” Petro told In These Times. By tying development to a wage standard,  “instead of transferring these subsidies directly to these select developers, we're also making sure that the benefits are shared more broadly by the city as a whole and the communities where these projects are completed.”

A living wage, which enables families to actually spend money to stimulate the local economy, is especially needed now that real wages have been eroded by the recession, soaring health and housing costs, and the collapse of Wall Street. Crain's New York reports that overall, eight in ten of the city's private-sector workforce saw their wages gutted during the Recession.

So far, community advocates have had some success in negotiating adequate wages with developers, but in the absence of a firm citywide standard, the agreements have been on an individual project basis, creating uncertainty for both businesses and workers.

As we reported last December, a major development plan known as the Kingsbridge Armory Project has stalled due to disputes over the community's calls for living wage jobs.

Nationwide, other cities have built job and wage standards into development plans, either on a project-by-project basis or through cityordinances, according to the National Employment Law Project. Los Angeles, for example, has applied a combination of citywide living wage mandates and project-based wage negotiations for developments receiving subsidies or operating on city-leased property. These deals cover restaurant servers at LAX airport, hotel housekeepers and cashiers at Trader Joe's.

The New York City living-wage bill has been coupled with another bill that would require prevailing wages, which are generally higher than both the minimum and proposed living wage, for building service workers at city-subsidized developments. Together, the two bills could have a broad ripple effect on pay scales throughout the private sector, since so many developments have absorbed millions in city subsidies over the years.

As for concerns about the economic impact of wage mandates, advocates point out that taxpayers already supplement the income of low-wage workers—indirectly, through public assistance. So the city can either let employers shaft poor workers today and leave the public to pick up the tab tomorrow, or compel privileged business to spread their wealth in the form of decent paychecks.

Meanwhile, critics question the value of the lavish deals between the city's Economic Development Corporation and big names like Jet Blue. Investigations by Gotham Gazette and Good Jobs New York have revealed that despite government giveaways, some projects have fallen short of expectations for job creation. Nationwide, labor activists warn that many corporate-friendly development subsidies do not benefit, and may even harm, local commerce and job creation.

In reality, it takes far more than $10 an hour for a family to survive in the city, but the wage levels proposed in the bill would at least give workers more leverage to negotiate higher pay or benefits at the collective bargaining table. Jeff Eichler, director of retail organizing project for the Retail, Wholesale and Department Store Union, said that raising the wage floor would strengthen the union by showing what labor organizing can accomplish through grassroots pressure.

In the current labor landscape, he said, “the problem of pushing towards a real living wage is that we start from such a low floor.... And all the pressure is downwards. So to establishing a floor helps us to go beyond the floor. So in terms of collective bargaining, that would be a real help.”

The living wage mandate would be a step toward a new social contract in the city's dealings with big business: New York is awakening to the idea that economic development isn't just meant to help corporations sponge off taxpayers, but to enable communities to leverage their labor and land to support growth that works for them.