An Ugly Jobs Report, and a Complacent Congress 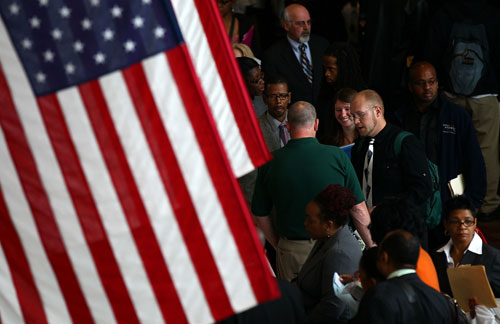 Applicants line up for interviews during a jobs fair at Nationals Park co-hosted by the AARP on May 11, 2010 in Washington, D.C.   (Photo by Win McNamee/Getty Images)

When will the White House push for real job creation?

As if the spread of oil across the Gulf of Mexico was not sufficiently disastrous, the nation's latest job report contained some very bad news.

The Bureau of Labor Statistics report showed a net job loss of 11,000 permanent private-sector jobs in May, according to the Economic Policy Institute. As the EPI pointed out, "The private sector saw very modest growth [in May], adding just 41,000 jobs, much slower than the average growth of the previous three months, which was 146,000."

A quick look at the figures would have been deceiving. Yes, the official jobless rate dropped to 9.7%. But some 411,000 temporary U.S. Census jobs—95% of the growth—will disappear this summer. Three-fourths of the private-sector jobs represented hires by temporary agencies, and permanent-job losses outweighed gains by 11,000, the EPI noted ruefully.

The new numbers provided a jolting injection of reality for those in the Obama White House and elsewhere complacently imagining a smooth economic recovery.

The new report ought to light a fire under the Obama Administration and Congress to pass $150 billion legislation for job creation and the extension of health and unemployment compensation benefits for the jobless.

At this point, there is a 99-week maximum in states with especially-severe rates of joblessness, and jobless workers are running up against that. "However, without another extension, many of those workers could begin to exhaust those benefits in June," the Economic Policy Institute warns.

EPI economist Heidi Shierholz calculates that some 8.2 million workers could lose benefits this year without a further extension, such as that contained in The American Jobs and Closing Tax Loopholes Act of 2010. If the extension is passed, that would limit the casualties to a still-significant 3.3 million jobless workers losing benefits.

The extension of unemployment benefits coming up next week in Congress is imperative because the typical household headed by an unemployed person had little savings to begin with and may now be cutting back on food to save money, with appalling consequences for family nutrition and health:

Raj Chetty, professor of economics at Harvard University …said that the median unemployed person has less than $250 in liquid savings at the time of job loss. He also presented a chart showing a sharp drop in food consumption when a person loses his job.

This not only supports other research showing that prolonged unemployment impacts health and even mortality rates, particularly when there is not an adequate safety net in place, but it also helps explain why unemployment insurance dollars are quickly put back into local communities.

But don't be surprised by strident resistance from the Republican Right up in arms over the federal budget deficit. The Right—possibly including some Blue-Dog-type Democrats of the Blanche Lincoln variety—will oppose greater outlays, despite the simple fact that increased federal spending on jobs and benefits for the unemployed are precisely what’s needed at this moment to kick-start the economy.

Of course, the American Jobs and Closing Tax Loopholes Act of 2010  will provide the GOP with an opportunity to lash out at deficit-creating Democratic "tax and spend" policies—even with taxes specifically targeted at billionaires,

Moreover, Republican indifference to the plight of the jobless running out of benefits—exemplified by Sen. Jim Bunning's (R-Ky.) infamous "I don't give a sh*t" response—is already evident. With the mid-term elections less than five months away, more cynical Republicans may calculate that a denial of benefits will cause some of the unemployed to lose faith in Democrats, vote Republican—or refrain from voting altogether.

But clearly, the need for more job-creation efforts and help for the jobless is growing more acute by the day. Jobless workers are losing benefits, and mega-banks are simply drawing interest from the Federal Reserve rather than lending out money to fuel the recovery. May actually set a record for home foreclosures. The American economy has increasingly been characterized by minimal job growth, at best.

In this dire context, AFL-CIO President Richard Trumka  thundered to Congress, "If you're not for this bill, you're not for jobs. Period. And please, no more excuses about budget deficits unless you're willing to make Wall Street pay its fair share to bring it down."