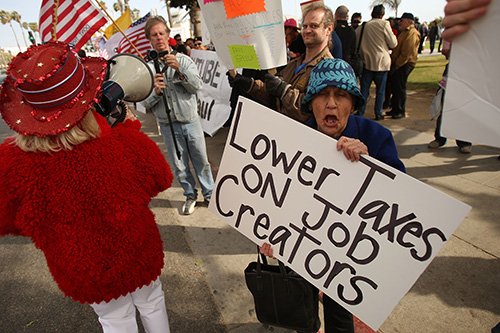 Seventy-four percent of self-described Tea Party Supporters would support a "national manufacturing strategy to make sure that economic, tax, labor, and trade policies in this country work together to help support manufacturing in the United States," according to the poll, put out by the Mellman Group and the Alliance for American Manufacturing. Likewise, 56 percent of self-described Tea Party Supporters "favor a tariff on products imported from other countries that are cheaper because they came from a country that does not have to comply with any climate change regulations in the country where the products were made."

The poll also shows that President Obama's approval rating are 11 points lower among households were a family member is employed in manufacturing than a household where no one is employed in manufacturing. That underscores a trend already noted: those most affected by the Democrats' failure to deliver on their promises of trade reform are turning against the Democratic Party.

Why? The reason is that many feel betrayed by Democrats. Government inaction during the last thirty years has destroyed the core of the American economy: manufacturing.

In 1988, card-carrying ACLU member Michael Dukakis carried my home county by an 11-point margin in a year in which he won only nine states nationally. Yet in 2008 my home county voted for Republican Sen. John McCain by a 17-point margin. It turned Republicans because Democrats sold out on NAFTA, the North American Free-Trade Agreement, and thousands of manufacturing jobs disappeared.

The Republican Party has been able to keep these voters in their ranks despite the fact that Republican party is doing nothing on the trade front either. Infact, there is absolutely no mention of trade reform in the Tea Party's official "Contract From America." (See Roger Bybee's great Working ITT piece on this problem for the Tea Party Movement). The Tea Party get its momentum not from an overall hatred of government, but from a hatred of government doing things that so often hurt people like unfair trade deals.

This new poll shows that the top concerns of all Americans, including Tea Party supporters, is not the federal budget deficit but that we are too deep of debt to China in terms of our trade imbalance. No major political party is championing this issue. The surprise victory of Democrat Mark Critz in John Murtha's old district which was expected to go Republican showed that Democrats can win over Republican voters when they campaign tough on trade issues.

If President Obama really wanted to heal a divided nation and take voters  away from demagogues like Glenn Beck, he could do it by taking real action on trade. He could do it by fufilling his campaign pledge to renegotiate NAFTA (a pledge now considered "laughable" within the administration). Then Obama could fulfill another campaign promise by slapping tariffs on illegal Chinese currency manipulation which make Chinese goods 25-40% cheaper than American goods.

The great thing about renegotiating NAFTA and slapping tariffs on China is that by law Obama doesn't need congressional approval to do it. He could do it unilaterally and send a huge signal to voters that he, along with those who support this policy, on the side of American workers. The president could use these steps to lay out a bold vision for an industrial policy to rebuild America.

The choice is President Obama's - reform trade and heal the countries' wounds or see a divided, unemployed white working class turn to voices of hate.