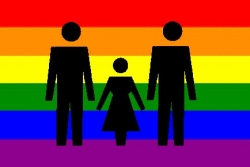 When a child is sick, the last thing a parent should be worried about is her next paycheck. Yet that's the perverse dilemma that besets millions of workers in an economy that's radically out of sync with the rhythms of modern family life. Activists are working to ease the strain by making the option of paid time off not only more generous, but also more open to all types of families, whether they've got one mom or two dads.

This week, the Labor Department moved to make family and medical leave policy accessible to same-sex households, showing that time off for caregivers isn't just a perk, but a civil rights issue in a labor force rife with discrimination.

In sharp contrast to European societies, millions of American workers are burdened by a lack of guaranteed paid leave time for sickness or family emergency. Meanwhile, even those limited, inflexible policies are especially punitive for same-sex couples, largely shutting them out of federal law. Same-sex partners are thus denied both full economic citizenship as well as the dignity of recognition of their loving relationships.

The Labor Department plans to clarify the rules of the Clinton-era Family and Medical Leave Act, which allows many employees (but not all) up to 12 weeks of unpaid leave to care for a sick child. Under the Labor Department's revision, if Mary's kid gets sick, her partner Jane could stay at home to take care of the child, even if Mary and Jane can't officially get married.

According to the advocacy group Family Equality Council, most children of same-sex partners do not live in states that legally recognize their relationship to their parents, and in the states that do, parents are generally “unable to extend health benefits to their kids or to make medical decisions on their behalf in the event of an emergency.” An estimated two million children nationwide are in the care of LGBT families.

The new reading of the legislation would build on other baby steps for LGBT rights under the Obama administration, including plans to extend hospital visitation rights to same-sex couples, the incorporation of same-sex partners into the Violence Against Women Act, and perhaps a repeal of the Pentagon's Don't Ask Don't Tell policy. All these measures inch toward equality in the absence of sweeping legislation, or a court ruling, that grants same-sex marriage rights.

But in their push for visibility in the workplace, same-sex partners also push the debate beyond marriage itself. A more inclusive definition of family dovetails with the gender justice struggle for the huge swath of the workforce that doesn't want to choose between earning money and caring for family.

Rights advocates have long campaigned for local, state and federal paid leave programs. Sherry Leiwant of A Better Balance, which has supported paid leave initiatives in several states and cities, including New York and San Francisco, told In These Times that the group includes same-sex domestic partners in its campaigns:

While the Obama administration's FMLA clarification applies specifically to children, the model concept recognizes same-sex partners as caregivers and as adult family members entitled to care.

While the benefits of paid family and sick leave are clear, the widespread lack of it deepens the racial, gender and income stratification of the workforce. A study by the Center for American Progress and U.C. Hastings Center for WorkLife Law suggests that a culture of overwork and inequality corrodes social stability:

Discrimination against workers with family responsibilities, illegal throughout Europe,  is forbidden only indirectly here. Americans also lack paid sick days, limits on mandatory overtime, the right to request work-time flexibility without retaliation, and proportional wages for part-time work. All exist elsewhere in the developed world.

So it should come as no surprise that Americans report sharply higher levels of work-family conflict than do citizens of other industrialized countries.  Fully 90 percent of American mothers and 95 percent of American fathers report work-family conflict. And yet our public policymakers in Congress continue to sit on their hands when it comes to enacting laws to help Americans reconcile their family responsibilities with those at work.

The Family Equality Council and other groups seek a two-pronged expansion of the FMLA through the Healthy Families Act. That bill, according to spokesperson Kevin Nix--

allows employees to take time off for "any individual related by blood or affinity whose close association with the employee is the equivalent of a family relationship." The "affinity" language is responsive to all kinds of family and caretaking configurations, and for LGBT families specifically who live in states where they can't marry and can't adopt the child they are raising, it means they would still qualify to take time off to care for each other when they get sick.

So whether the family member is a partner of the same gender, a grandma, or an adopted son, the law would ideally embrace a progressive concept of emotional kinship. Whatever kind of relationships give meaning to a worker's life, an equitable paid leave policy would ensure that in hard times, everyone has the right to be there for a loved one.