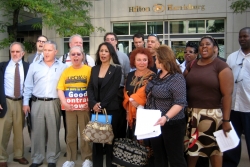 Rite Aid workers from Pennsylvania, New York and California gathered in Harrisburg, Pa., on Wednesday, June 23, before the company's annual meeting to rally for good jobs and show support for the five-year struggle by more than 550 employees to form a union at Rite Aid's massive distribution center in Lancaster, Calif.

At the shareholders meeting, the national AFL-CIO's Office of Investment released a paper on Rite Aid's poor performance, which singled-out CEO Mary Sammons for excessive pay. The AFL-CIO presented a shareholder resolution that would give stockholders an advisory vote on executive pay.

Two Rite Aid workers from the distribution center in Lancaster, Sylvia Estrada and Angel Warner, of the International Longshore and Warehouse Union, made impassioned pleas to "right the wrongs" at Rite Aid.

"We've been fighting for over four years for a union contract that would give us our rights and a voice at work," said Warner. "We want to work with Rite Aid and grow this company. These jobs pay our bills. But we also want to be paid fairly and treated with respect.  For that, we need Rite Aid to reach an agreement with our union."

"We're standing with the Rite Aid workers to help them win the good jobs our communities need," said Pennsylvania AFL-CIO President Rick Bloomingdale, who also attended the shareholder meeting. "Rite Aid should recognize that its employees are its most important asset."

Surprisingly, many other stockholders with no connection to the unions rose to speak at the meeting. All were highly critical of management and many voiced their support for improved labor relations at the company.

It began more than six months ago when the Longshore Workers Union staff and I recruited 18 friends and allies to buy small shares of Rite Aid stock using an online discount brokerage so that we'd have access for many people to attend the meeting.  We also were fortunate that New York City pension funds with a large stake in Rite Aid promoted the "say on pay" shareholder resolution.

Having the proxy's and the shareholder resolution helped bring all of the Rite Aid unions together in a coalition to face top executives at the annual meeting. About 80 people turned out for the spirited rally beforehand.

Hopefully, the net effect of this collaborative effort will leave Rite Aid workers better prepared to deal with the challenges they face at their mismanaged company.

Rand Wilson is an AFL-CIO Communication Coordinator based in Boston, Mass. Copies of the AFL-CIO briefing paper and a leaflet distributed to the public during the march and rally are available from Wilson via rand@mindspring.com. Pictures from the rally may be viewed on Google's Picasa site here.