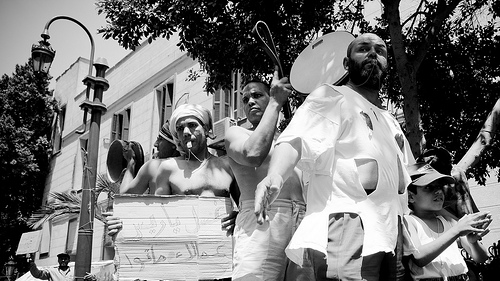 Amonsito textile workers demonstrate in front of the Egyptian parliament in Cairo, in May 2010.   (Photo by Hossam el Hamalaway via Flickr)

CAIRO, EGYPT—They banged rocks on metal barricades that pinned them to the sidewalk. They pounded drums. And if that wasn’t enough, they blew whistles with all the wind they had left. (A video of the protest is here.)

The ruckus on a steamy Cairo afternoon (see video beow) was absolutely deafening in a place where such disorder was taboo and quite dangerous only a few years ago. But here were dozens of straggly, sweaty workers from a factory outside of Cairo, sleeping nightly on the sidewalk in front of one of the houses of the Egyptian parliament and daily raising a noisy, eye-catching hell along one of the Cairo’s busiest downtown streets.

They were just one of the many groups of workers who have taken to Egypt’s streets in the last few years, creating a wave that has swept up private workers, public employees and workers in the government’s vast warehouse of state-owned industries.

The surge is stunning because it openly defies Egypt’s traditional union leadership, which is closely linked to the government and pokes its fingers in the face of a security-minded regime that has led the country for the last 29 years under emergency powers.

It is estimated that over 2 million workers have taken part in over 3,300 factory occupations, strikes, demonstrations or other forms of protest since 2004.
For Egypt’s politics, for the country’s workers and for parts of the Arab world, where unions are neither free nor even exist, what’s been happening in downtown Cairo has been more than riveting.

Joel Beinin, a Stanford University professor, describes it as “the largest modern labor movement in Egypt and the largest social movement in the Arab world since World War II.” But for the average Egyptian it’s a guessing game whether it will have any lasting effects or vanish with a handful of deals.

What has brought the workers’ blood to a boil is less of a mystery.

A much-detailed report released earlier this year by the AFL-CIO’s Solidarity Center on the roots of the unrest points to the steady growth in unemployment for average workers and deteriorating conditions for those struggling by on low wages. Beinin, a leading expert on Egyptian labor, was the major writer.

Life is, indeed, dire for some Egyptians.

Unchanged since 1984, the minimum wage in Egypt today is about $7 a month. Many workers earn more than that, but just barely, according to Egyptian news reports. The average government worker, for example, earns about $70 a month, said al Ahram, a government-owned newspaper.

An estimated 40 percent of the 80 million Egyptians earn less than $2 a day, which puts them under the international standard for poverty. But it is not just their low wages that has angered Egyptian workers. Many of the demonstrations in the last few years have involved workers angry about broken promises from their bosses. So, too, after the government stepped up its privatization of state-owned businesses several years ago, workers’ complaints took off.

Rather than boosting workers’ pay and conditions, privatization, according to the Solidarity Center report, has brought less job security, longer hours and lower social standards for the workers.

The complaint from the workers from the Amonsito textile factory, who were sleeping in front of the parliament, was that the owner of their factory had fled the country due to financial problems and left the factory and them to flounder.
The bank that took over the plant eventually shut it, leaving the workers to rely on occasional payments from the Ministry of Manpower and Immigration, according to the independent newspaper al Masry al Youm.

Driven to financial desperation, the workers had camped outside of the parliament several months ago, and that led to a deal from the bank to make one-time factory closing payments to the factory’s 1,700 workers. But when the payments were not forthcoming, the workers returned to the sidewalk.

“We are not going to fight or make trouble. We are just going to stay here until the government implements the agreement to pay us the money,” vowed Khaled el Shishawy.

A short, muscular man in his 40s with 20 years at the factory, he patrolled the line-up of demonstrators as passengers in hundreds of cars stalled in the rush hour traffic stared at them and at the dozens of police and security forces lined up facing the workers.

The workers didn’t want their closing money, but they had no choice since there are no other jobs for them, el Shishawy said. “We call this ‘early death money,’” he explained over the din. “The older people will not be able to find work again but the younger ones will try. But even they can’t find work.”

They weren’t the only protesters on the street. Nearby was a group of disabled complaining about the lack attention to their needs. And there was a father protesting inadequate education for his children.

To keep their demonstration going, the workers were taking shifts on the street. That allowed them to go home occasionally to scrounge for money for the families. In the meanwhile, they experimented with new ways to catch the attention of the Egyptian news media. Some days they tore their shirts to show their poverty. Some days they held fake funerals.

And when the heat became unbearable, they prayed en masse in the early mornings.

To Hossam el Hamalaway, a journalist and photographer who has documented Egypt’s labor unrest, the “strikes are important because Egypt is going through an era of transition.” Spurred by the daring shown by political demonstrators, the workers “got courage,” he said.

Plus they were able to form the first independent union since the Egyptian Trade Union Federation was created a half century earlier. But the Amonsito workers’ determination not to budge crumbled in minutes near the end of May.

In a sudden show of force, government security forces cleaned them and any other protesting workers off the streets in front of the parliament. Officials said they were reacting to threats from the Amonsito workers, and ordered the security forces to deal leniently with the demonstrators, according to al Ahram.
In contrast, the workers complained that the security forces had bludgeoned them without reason, leaving several bruised and battered, according to an article by the Egypt Daily News.

Not long afterward, a handful of the Amonsito workers gathered in a rundown building in another part of Cairo along with others who share their workplace woes.

It didn’t matter that they had been swept off the street, confidently explained el Shishawy. His fellow workers would take up their protests outside other government buildings in Cairo, he said.

What the worker activists mostly wanted to talk about was how to get their word out to workers around the world. They didn’t think anyone had heard about their struggles.

And because they are dissidents, trying to form independent unions outside of the government-controlled organizations, they said they had no idea how to reach beyond Egypt. “We are not afraid,” said one middle-aged factory worker. “But we don’t know who to talk to.”

Abel Kader Nada, a veteran worker and an official in the newly formed union for real estate tax collectors, was there to brainstorm with the others about a joint strategy.

Until his fellow workers protested, he said he had never been involved in union activities. But that came to an end with their protest. And their luck in landing handsome wage increases, he added, wasn’t the only reason for the change of mind that he and others experienced.

“It gave us courage,” he explained.