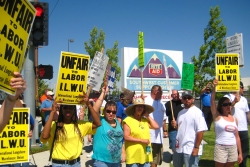 Rite Aid workers and supporters rallied in front of the giant Lancaster Distribution Center for a good contract.   (Photo by Rand Wilson)

More than 75 Rite Aid workers from the Southwest Distribution Center in Lancaster, Calif. marched off the job during their lunch break this week to join supporters from dozens of other unions demanding that Rite Aid (a drugstore chain) management negotiate a good contract.

The workers began organizing with the International Longshore and Warehouse Union (ILWU) to improve their wages and working conditions more than four years ago. Since then, a rank-and-file committee of warehouse workers has met with management more than 100 times in an attempt to peacefully reach a first contract that would put their conditions of work in a legally binding union agreement.

"For over a year, management was looking to avoid sincerely bargaining with us," said Sylvia Estrada, who's worked at Distribution Center for 11 years and is a member of the union bargaining committee.  "They did everything possible to break our unity–even committing Unfair Labor Practices. But we have stuck together through thick and thin and we will win!"

"Over 100 bargaining sessions and two years of talks is way too long for workers to wait for justice," ILWU Vice President Ray Familathe said.  "Rite Aid management needs to get serious about reaching an agreement that will give employees the good jobs that our communities need."

At the rally on Tuesday, Estrada and another co-worker, Angel Warner, reported back to the membership about their visit to Harrisburg, Pa., on June 23, where they rallied with other Rite Aid workers and attended the company's annual shareholder meeting.

"We told Rite Aid's new CEO, John Standley to stop dragging out negotiations and give us a good contract," said Warner.  "They thought they could grind us down and demoralize us.  But instead we're growing stronger.  And with the support of so many unions—and even some shareholders—we totally rocked their world."

Members of the United Food and Commercial Workers (UFCW), SEIU 1199, and the Teamsters Union also spoke out at the shareholders meeting.

Several dozen ILWU Local 30 members from the Rio Tinto mine in Boron, Calif., came to support the Rite Aid workers. Their recent contract victory against the global mining giant has inspired Rite Aid workers not to give up. The miners won a major labor battle and a good contract after being locked out of their jobs by Rio Tinto for three and a half months.

Rand Wilson is an AFL-CIO communications coordinator. Pictures from the Lancaster rally may be viewed on Google's Picasa site.