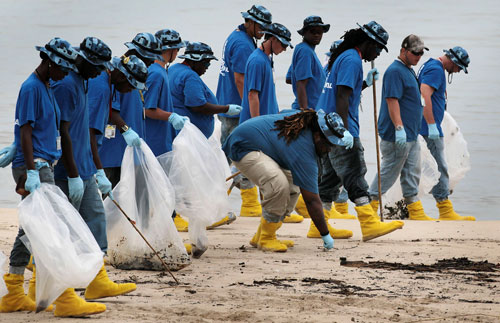 It’s hard being an oil spill cleanup worker. After a long day in the blistering sun, battling fumes and heat exhaustion, you just want to go home and relax. Unfortunately, your temporary housing unit may also be saturated with toxic chemicals.

On June 30, the New York Times broke the news that some cleanup workers were being housed in decommissioned FEMA trailers left over from Hurricane Katrina, which had been declared unfit for human habitation due to high levels of formaldehyde. Luckily, only a small percentage of cleanup workers are living in these trailers, most have been provided with newer accommodations.

Now, the House Energy and Commerce Committee is demanding to know how the tainted trailers ended up back in the housing market.

Last week, Committee Chair Henry Waxman (D-Ca) sent a strongly-worded letter to the heads of the Federal Emergency Management Administration (FEMA) and the General Services Administration (GSA) demanding to know how these trailers had gotten back into circulation.

In April, the Subcommittee on Commerce, Trade, and Consumer Protection held a hearing on the fate of 100,000 temporary housing units requested by FEMA and procured by the GSA to house evacuees displaced by Hurricane Katrina in 2005. At the time, many residents complained of an overpowering chemical stench. Some said the fumes stung their eyes and throats. Investigators eventually traced the symptoms to excessive levels of formaldehyde, the main ingredient in embalming fluid.

Formaldehyde is used in many common construction materials and manufactured products. Investigators surmised that the trailers became saturated with the chemical due to a combination of cheap particle board and poor ventilation. Formaldehyde can irritate the nose and throat. Long-term exposure may increase the risk of leukemia.

In broad outline, we know that the trailers found their way into the housing market after they were sold off to the general public at a fraction of their original cost. Ironically, the major buyers were disaster contractors who are now renting the trailers to BP or the government.

According to FEMA and the GSA, buyers were warned that these trailers were not fit for housing. As a condition of the sale, buyers had to promise not to house anyone in these trailers and to pass on this information to any future buyers.

It has been suggested that the trailers are now safe to occupy because the formaldehyde would have dissipated over the last 5 years. That’s an interesting theory, but nobody has actually tested it. In his letter, Waxman asked why FEMA never tested the air in the trailers before putting them up for sale. A Times reporter who inspected a trailer reported that retained an “overpowering smell of formaldehyde.”

Waxman also wanted to know why FEMA and the GSA trusted buyers to tell the truth, rather than affixing a permanent label to the trailers themselves warning of the formaldehyde risk.

At the April subcommittee hearing, many legislators and public advocates expressed concerns that FEMA and the GSA weren’t implementing enough safeguards to protect the public from unscrupulous operators who might try to use the trailers as housing. Waxman is asking for details on how the agencies addressed those concerns.

FEMA and the GSA have until July 16 to provide Waxman’s committee with answers.

The BP spill cleanup workers are heroes, no less than the brave men and women who cleaned up after 9/11. They are grappling with the worst environmental disaster in our nation's history. The least we can do is give them a clean place to sleep.