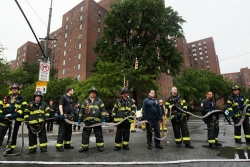 New York City firefighters at work on May 12, 2010, in lower Manhattan.   (Photo by Chris Hondros/Getty Images)

Two week ago, a major piece of labor law legislation called The Public Safety Employer-Employee Cooperation Act passed the House with Republican support, and no one heard about it. The bill grants firefighters and safety officers the right to collectively bargain even in the states that forbid public employees from collectively bargaining.

The bill may die in the Senate, but already several Republican Senators have signaled their support for the measure. But regardless of the legislation's fate, just being able to pass the bill through the House is a large victory for a labor movement that has seen no progress under President Obama.

So how were the firefighters and safety unions able to pass such a measure at a time when, as the New York Times points out, even Democrats are attacking public employees? What lessons does this offer the labor movement?

There's important background here: Even in "right to work" states, firefighters and police officers are heavily organized into unions, and they aren't afraid to flex their muscles in confrontations over working conditions. (Police officers often do it illegally by going out on strike by calling in sick en masses in what is labeled “the blue flu.")

Organized labor was able to pass the measure by arguing that giving public safety officers and firefighters the right to collectively bargain is essential to maintaining public safety. Here's International Association of Firefighter's statement hailing the legislation:

While most firefighters and law enforcement officers are already provided bargaining rights under state laws, too many public safety officers do not have the ability to present ideas about how they can better protect the public safety. The Public Safety Employer-Employee Cooperation Act will ensure that every state allows discussions between first responders and the agencies that employ them, and will promote productive partnerships between labor and management.

They successful argued an old labor talking point: In order to provide for the public general welfare, workers need the power to hold their employers accountable for their actions. This applies not just to police and firefighters, but to workers across the board.

The BP oil spill proves this point. The rig workers repeatedly tried to warn that the rig was going to blow up, but had no means to hold BP accountable for refusing to work on it since they weren't union workers. The inability of those workers to hold BP accountable because they didn't belong to a union has in part caused the greatest environmental crisis in our nation's history.

Likewise, the 31 miners who died in the Upper Big Branch Mine in West Virginia tried to a join a union three separate times. Each time they tried, 65-70 percent of the workers signed cards saying they wanted to be members of a union. And each time, the Massey Energy CEO Don Blankenship drew out the election process for months while he threatened illegally to close the mine if the workers voted for a union. And each time, the workers gave into the months of intimidation tactics and voted against joining a union in order to save their jobs.

After every mine disaster, a new mine safety laws gets implemented, and new ones quickly are ignored, as journalist Mike Lillis has chronicled. The only way we can make the mine safer is if miners can refuse to go down into unsafe mines without fear of losing their jobs. As we talk about expanding nuclear power under the energy bill, it’s critically important for the safety of the nation that nuclear workers are given full labor rights that allow them to shut down plants if they are unsafe.

The lessons of the firefighters and public safety officers being able to pass this law through the House with bipartisan support is that linking public safety and employer accountability to union rights is a formula for success. In every bill moving through Congress, whether it is the energy or bridge construction bills, the labor movement should insist that they contain provisions giving workers employed by those industries the labor rights to hold their employers accountable for the general public welfare and safety.

Throughout labor's history, linking labor rights and public safety has been a very persuasive argument for winning public support for union organizing.  After the Triangle Fire of 1911 killed 146 garment workers, unions, with the strong public support, were finally able to organize almost all of the nearly 500,000 workers then employed in New York's garment industry. In the wake of the BP oil spill and the West Virginia mine disaster, labor must make the argument that it’s in the public best interest for workers to have the freedom, through unions, to hold employers accountable.