Collaboration Power: How Are Unions and Educators Joining Forces? 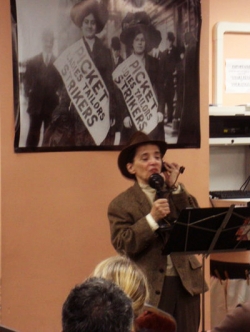 Lulu LoLo presented "Soliloquy for a Seamstress" at the ELC Forum 2010. Here she portrays reporter William Gunn Shepard at the scene of the Triangle Fire in New York City.   (Photo courtesy the Education & Labor Collaborative)

I participated in a remarkable event this past weekend, the Education and Labor Collaborative, hosted by Adelphi University at its Manhattan center. The focus of the event was teaching the Triangle Fire, the 1911 tragedy that killed 146 mostly young, women workers. The goal was to explore ways for teachers to teach the fire as a larger lesson in social justice. With that in mind, Adelphi brought together labor scholars, unionists and activists, as well as area high-school teachers, for a weekend of training.

It was a great event and the teachers got a lot out of it. But, it led me to think about these kinds of collaborations, and wonder why Adelphi, which has its main campus in suburban Long Island, was hosting the event. I wondered why City University of New York (CUNY) wasn't hosting it—and then realized that it probably has hosted something similar, and I just didn’t know it. I began to explore other labor and educator groups and found many, scattered across the country.

Which brings me to this post. I write as a form of community journalism, in the hopes that readers will, via the comment section, list any and all such collaborations (with some contact info) between unions and educators (either through schools or districts or labor education centers). My hope is that activists and unionist will be able to see where activity is being done in their area and can lend their support and get involved.

As I sat in Adelphi's lecture room Saturday watching the school teachers in attendance, I realized the power of such sessions. Here were dedicated teachers, caring professionals, looking for resources to help make them better teachers. They left the event fully armed with new knowledge. I am sure that when they return to their classrooms in the fall, their lessons will help students better understand America's history of labor struggles.