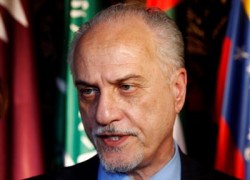 Last week electricity union offices across Iraq were raided under a July 20 decree from the Minister of Oil and Electricity, Hussain al-Shahristani, which banned trade unions in the energy sector and threatened serious legal action against union activity. The decree includes these provisions:

The ministry of electricity and in coordination with the police is ordered to close all trade union offices and bases and to take control of unions' assets properties and documents, furniture and computers with proper listing of all the items seized.

It also calls for the use of draconian 2005 anti-terrorism laws against anyone who makes threats, uses force or causes damage to public property, presumably in the course of union activity. It also orders the revocation of any privileges afforded union officials, by specially designated government officials who will sit in central committees in each ministry department for this purpose.

International labor groups are calling the decree part of a systematic attack on unions in Iraq in recent years. US Labor Against the War (USLAW) says the “anti-union decree is the latest in an escalating series of measures designed to incapacitate and destroy the Iraqi labor movement.”

The order is in clear violation of international core labour standards. It is also a violation of the Iraqi constitution, and one of the most draconian acts by the Iraqi Government since the fall of Saddam. It comes from Hussain al-Shahristani, the Minister for Oil, who has recently taken over the electricity portfolio and has a worrying track record of using Saddam-era labour laws against trade unions.

As David Macaray explains in a February Counterpunch story, unions and labor organizing in general have a long, powerful history in Iraq, going back to the days of British rule and including close ties to the Communist party. Unions were largely decimated under Baathist rule beginning in the 1960s and continuing under Saddam, who outlawed unions in the public sector which even now represents more than half the country's workforce. Macaray explains:

By 1968, Iraq’s organized labor infrastructure had been demoralized, corrupted and reduced to a Baathist public relations tool. When Saddam Hussein seized power, in 1979, it was more of the same. By insisting that all the jobs in the country belonged to the Iraqi state and that all the workers were, therefore, government employees (“civil servants”), Saddam expropriated the labor movement in both name and deed.  He went so far as to decree that the term “worker” no longer be used.

But since Saddam’s overthrow, Iraqi unions have been reclaiming their independence and growing in power. Macaray says:

Today there are three relatively large labor federations in the country, the largest of which is the General Federation of Iraqi Workers (GFIW), formed in 2005 and formerly known as the Iraqi Federation of Trade Unions (IFTU).  There is a teachers’ union in Iraq, a journalists’ union, an engineers’ union, an oil and gas union, a carpenters’ union, a journeymen electricians’ union; there is an organization called the Syndicate Union of Kurdistan Workers.  The diversity and vitality are astonishing.

The current government, in keeping with Bechtel, Halliburton and other U.S. and multinational companies, has responded with a raft of anti-union measures. USLAW summarizes post-Saddam attacks on unions wherein the government has been:

* Freezing union bank accounts and assets;
* Banning union leaders from traveling outside Iraq without prior government approval;
* Transferring union leaders to remote locations far from their homes, families and union members;
* Issuing criminal charges against Oil Union Federation officers alleging they are undermining the Iraqi economy by protesting privatization of oil resources and companies;
* Ignoring the requirement in the Iraqi Constitution calling for enactment of a basic labor rights law;
* Violating ILO (International Labor Organization) Convention 98 on collective bargaining to which Iraq is signatory.

The TUC notes that a labor law complying with ILO standards has been drafted in Iraq, but has not reached the floor of parliament. TUC general secretary Barber said:

Unions in Iraq have a vital role to play in rebuilding the country. They are one of the few forces that unite people regardless of tribal, ethnic or religious boundaries, in striving for a peaceful, prosperous and democratic Iraq.

Yet elements within the Iraqi Government seem determined to go back to the dark days of a police state. While Iraqi political parties continue to haggle over the make-up of the new Government, a key part of civil society is burning.