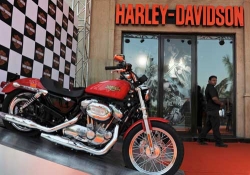 A security guard stands outside the newly-inaugurated Harley-Davidson dealership in New Delhi, India, on July 14, 2010. The iconic motorbike maker is revving up to go full throttle on India's famously potholed roads.   (Photo by MANAN VATSYAYANA/AFP/Getty Images)

Motorcycle-maker Harley-Davidson is revving up its engines, nearly tripling last year's profits in the second quarter by hauling in $71 million.

This follows first-quarter profits of $68.7 million. But Harley is still roaring toward a head-on collision with the workers in its hometown of Milwaukee, where the company has been a beloved symbol of the city's gritty blue-collar image and pride in craftsmanship. Harley is still demanding $54 million worth of wage and benefit cuts, along with changes in work rules, from the United Steelworkers within the next 60 days.

Unless Harley gets the concessions before the current contract expires in April 2012, it has announced that it will zoom off to a new location with at least 1,400 jobs. Harley, like many other U.S. firms, is managing to extract bigger profits despite slow, sometimes declining sales and shrinking workforces, as the New York Times reported:

This seeming contradiction — falling sales and rising profits — is one reason the mood on Wall Street is so much more buoyant than in households, where pessimism runs deep and joblessness shows few signs of easing.

Many companies are focusing on cost-cutting to keep profits growing, but the benefits are mostly going to shareholders instead of the broader economy, as management conserves cash rather than bolstering hiring and production.

Clearly, bigger profits are doing nothing to promote an economic recovery. CEOs have little motivation to invest in new machinery and hire more people as spending power continues to lag badly—due precisely to the widespread wage-slashing and job cutting by other corporations doing the very same thing.

The persistence of high unemployment—widely predicted to extend for as long as another four years or even longer—gives CEOs enormous leverage over workers. Even when profits are roaring back, as at Harley, U.S. corporations face no obstacles to relocating production in low-wage southern states or repressive nations like China or Mexico if workers refuse to concede to their demands.

Ford is cited by the Times as another firm that has managed to make bigger profits with lower sales and fewer workers:

At Ford, revenue in its North American operations is down by $20 billion since 2005, but instead of a loss like it had that year, the unit is expected to earn more than $5 billion in 2010. In large part, that is because Ford has shrunk its North American work force by nearly 50 percent over the last five years.

Somehow the Times' neglected to mention that 62% of Ford's production now takes place outside the United States. More generally, the environment of long-term, prolonged joblessness has created an environment where maximum production is squeezed from the fewest workers possible, the Times stated:

Because of high unemployment, management is using its leverage to get more hours out of workers,” said Robert C. Pozen, a senior lecturer at Harvard Business School and the former president of Fidelity Investments. “What’s worrisome is that American business has gotten used to being a lot leaner, and it could take a while before they start hiring again.”

Corporate America's no-hiring mode continues a long-term trend, as job growth in the U.S. over the last decade has been under 1% compared with gains in of 22% to 38% every decade since 1940.

While corporations individually have discovered how to profit temporarily from vast reductions in their workforces and the biggest wage-slashing spree since the Great Depression, their strategies offer no way out of the Great Recession. As the Times noted, the increasingly leaner and meaner workplace has a downside:

The problem is that companies are not investing those earnings, instead letting cash pile up to levels not reached in nearly half a century.

“As long as corporations are reinvesting, the economy can grow,” said Ethan Harris, chief economist at Bank of America Merrill Lynch.

“But if they’re taking those profits and saving them, rather than buying new equipment, it hurts overall growth. The longer this goes on, the more you worry about income being diverted to a sector that’s not spending.”

The current direction of Corporate America not only prolongs the
recession. It also re-distributes wealth upward—thereby taking away the very spending power from working families that is needed to break out of the recessionary cycle.

At a moment when the richest 1% already hauls in 23.5% of all annual income in the United States, there is little likelihood that the super-rich will be igniting an economic recovery with even more cash on their hands. They are much more likely to simply add to their already-vast savings:

“There’s no question that there is an income shift going on in the economy,” Mr. Harris added. “Companies are squeezing their labor costs to build profits.” …
In fact, while wages and salaries have barely budged from recession lows, profits have staged a vigorous recovery, jumping 40 percent between late 2008 and the first quarter of 2010.

Despite all the evidence that more money for the rich does not promote economic recovery, that is precisely the "remedy" being prescribed by the  Republicans in Congress.

For example, Congressman Paul Ryan (R-Wis.), who represents a district with more than 30,000 jobless living in hollowed-out factory towns like Racine and Janesville, is busy promoting an extension of the Bush tax cuts for the super-rich and an end to all federal stimulus programs, as he
argued on Hardball last night.

By resisting any further economic activity by the government to jump-start the economy, Ryan and Co. hope that they are setting up Obama and the Democrats to take the blame for the seemingly endless misery caused by the recession.

By now, it should be obvious that the Republican strategy amounts to economic sabotage that will victimize society's most vulnerable citizens. Ryan will likely emerge unscathed in November, as he is sitting on $2.2 million in campaign cash, although he faces a feisty but under-funded Democratic opponent in John Heckenlively, one of my successors at the Racine Labor newspaper.

But it remains to be seen if other Republcians can get away with an economic plan that means even more prolonged agony for the jobless and under-employed.