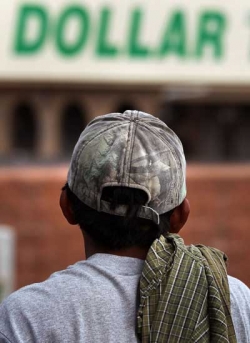 An undocumented immigrant stands on a curbside awaiting day labor work on July 26, 2010 in Phoenix. Arizona's new immigration enforcement law, SB 1070, makes it a crime for undocumented immigrants to 'apply for work, solicit work in a public place or perform work as an employee or independent contractor in this state.'   (Photo by John Moore/Getty Images)

The Arizona Interfaith Alliance for Worker Justice, a worker center in Phoenix, has seen a “huge spike” in wage theft since SB 1070, Arizona’s draconian immigration law, passed in April. Trina Zelle, the group’s executive director, has seen a “noticeable shift” in the four months since the measure was signed into law.

"Employers are even more brazen in their mistreatment of workers," Zelle says. "Increasingly, “Go ahead, try and make me pay you” is the response workers hear when they confront their employers over unpaid wages.

Under S.B. 1070, scheduled to be implemented on Thursday, the police are required to question anyone they have a “reasonable suspicion” is in the country illegally, and arrest and move to deport anyone who can’t prove their legal status. The law will lead to racial profiling, deter immigrants from reporting crimes, and further exacerbate racism and intolerance.

As early as May, the measure had cast an ominous shadow. A friend of Zelle’s, a Latino U.S. citizen, was pulled over by police and asked for his birth certificate. Naturally incredulous – who travels with their birth certificate? – he was told by the cop, “Well, you look like an illegal.”

So even before its official implementation, the law has made a palpable impact. The measure’s mere passage, say worker center organizers, has begun to drive immigrant workers even further underground, having a silencing effect on them in the face of rampant violations of their rights in the workplace.

The Houston Interfaith Worker Justice Center has also seen more cases of wage theft recently. “Workers do frequently mention that employers verbally abuse them because of their immigration status (or assumed immigration status),” says Laura Boston, the worker center’s director. “Frequently,” she adds, “employers use immigration status as an excuse to justify not paying them.”

Workers, on the one hand, are a lot more fearful to start workplace justice campaigns with us. What used to take our organizers a couple of weeks of house visits and one-on-one meetings is now dragging on for months.

On the other hand, high-road employers who are paying living wages and providing benefits are fearful and confused – even if they’re not in Arizona, they somehow think cops anywhere can bust in and check peoples’ documents. It’s definitely a lot worse, and the law isn’t even being enforced yet!

“The first place the authorities will go is to day laborer corners,” he says. On Monday, a day laborer from Guatemala fell off a roof and died in Phoenix. “The employer is nowhere to be found,” says Alvarado. “When S.B. 1070 goes into effect, do you think the wife of that man is going to call the police or the Department of Labor? People are not going to be filing claims. The abuse is going to get worse. It’s a human rights crisis.”

This is what Michelle Chen, writing for this blog, recently called “the downward spiral of exploitation across the entire labor force.” And with a broken national immigration system, legislators in more than 20 states are considering copycat measures, tapping into anti-immigrant sentiment that has only been exacerbated by the economic crisis.

But despite the media hype surrounding those measures, anti-immigrant initiatives around the country in the wake of S.B. 1070’s passage seem to be failing. As the Progressive States Network points out, “the reality is that from Nevada to Arkansas to Massachusetts to Kansas and Rhode Island, anti-immigrant bills and ballot initiatives largely didn't move or failed to make this fall’s ballot.”

We believe this is a direct result of the huge national outcry and mobilization in opposition to S.B. 1070 on the part of immigrant rights activists, worker advocates, and faith groups. Any state legislature considering passing a similar measure is confronted with the reality of the huge economic and social costs the state of Arizona has had to endure after passing SB 1070.

The key to stemming the downward spiral of exploitation is tougher labor law enforcement. “If we ever hope to bring immigrant workers out of the shadows in which they’ve been laboring,” says Kim Bobo, author of Wage Theft in America and the Executive Director of Interfaith Worker Justice, “we need to forcefully oppose anti-immigrant legislation and stand up for both comprehensive immigration reform and vigorous enforcement of the nation’s labor laws.”

And those labor laws apply to all workers employed in the U.S. regardless of immigration status – a fact constantly underscored by U.S. Labor Secretary Hilda Solis.

Another Progressive States Network report points in the same direction, underscoring that the federal government’s “systematic lack of wage law enforcement has contributed to the dysfunction of our immigration system.” The report adds an interesting strategic twist:

Since going after employers who violate wage laws politically unites all workers, immigrant and native alike, cracking down on those employers will actually strengthen the progressive political base.

Wage enforcement campaigns, the report points out, have served to undermine anti-immigrant attacks. When the Iowa Senate, for example, approved a bill to tighten enforcement on employers who violate Iowa wage laws, it stalled movement of an anti-immigrant bill approved in the state’s House and effectively put the kibosh on anti-immigrant legislation.

poses an existential threat that either pushes people further into the shadows or moves them to take action. Some people are so fearful that they won’t even come forward, but some are so angry that they’re willing to risk a lot to claim their rights. If you can get deported just walking around, why not put up a fight? It’s Zapata’s admonition that it’s better to die standing than to live on your knees.

Danny Postel is North America Co-Chair of the Iran Labor Support Committees and a member of Chicago’s No War on Iran Coalition. He is communications coordinator of Interfaith Worker Justice, and a contributing editor of Logos.

Ted Smukler is Public Policy Director for Interfaith Worker Justice. He has authored several IWJ resources, including reports on worker abuse in New Orleans following Hurricane Katrina and For You Were Once a Stranger, IWJ’s manual on immigration and faith. For more than 20 years, he was a community organizer in the Chicago metropolitan area, working on issues such as affordable housing, school reform and parental leadership involvement, public safety and treatment for addicts.