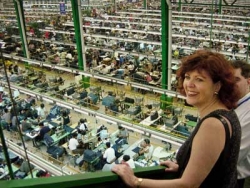 President Obama’s pledges to sign free trade deals have been strongly opposed by labor unions. But recently, his administration slightly appeased his critics by enforcing workers’ rights agreements in an existing trade pact.

Last Friday, the United States filed a complaint against Guatemala for failure to enforce labor agreements outlined in a free trade deal with Central American countries, making it the first time the U.S. has brought a case against a trade partner.

The U.S. conducted an 11 month examination and found Guatemala did not uphold their obligations to ensure the freedom of assembly, right to collective bargaining, right to organize and decent work conditions. Ron Kirk, the United States trade representative, made the announcement in front of steelworkers in Pennsylvania. Kirk said that the violations made it difficult for American workers and businesses to stay competitive as a result of declining labor standards.

“With this case, we are sending a strong message that our trading partners must protect their own workers, that the Obama administration will not tolerate labor violations that place U.S. workers at a disadvantage, and that we are prepared to enforce the full spectrum of American trade rights from labor to the environment,” he said.

The decision was welcomed by labor unions from both countries. The AFL-CIO and United Steel Workers both expressed support. Guatemala’s agro-industrial union called the measure “a first step” to improving labor rights.

The complaint, while historic, still works within the existing framework of the neoliberal trade agreement, which unions, including the AFL-CIO have historically opposed. Labor groups say the free-trade agreements send manufacturing jobs abroad, often to countries where labor laws are not properly enforced. They add that the agreements do little to increase living standards.

Economists have had a wide range of opinions on whether free trade deals like NAFTA contribute to American job losses. Politically, it has been a contentious issue among Democrats and unions. The trade pact with Central American states, officially called Dominican Republic-Central America-United States Free Trade Agreement (CAFTA-DR), was able to inch past Congress under President George W. Bush.

The U.S. claim against Guatemala was also similar to what unions did two years ago. In April 2008, the AFL-CIO and six Guatemalan unions filed a case to the United States labor department accusing Guatemala of violating labor laws. Guatemala has been one of the worlds most hostile areas for unions. The latest annual survey by the International Trade Union Confederation found that the country had the second highest murder rate of labor leaders. Sixteen labor leaders were killed in 2009.

The United States will consult with Guatemala to resolve the issue. If the dispute heads into an arbitration panel, a ruling against Guatemala can lead to fines totaling $15 million.

The decision to enforce labor protections now is timely. Obama has proposed to stimulate the economy through a free trade agenda that aims to double exports over five years. Obama has sought to sign deals with South Korea, Colombia and Panama that have been stalled in Congress.

The measure is seen as a gesture to Democrats and labor groups who have opposed CAFTA and similar agreements. Democrats applauded the action to file suit against Guatemala, probably a move by President Obama to build political consensus around free trade. With elections just around the corner, setting up the announcement in a union heavy state like Pennsylvania also appeals to gaining labor's support.

Democrats like Representative Sandy Levin of Michigan applauded the decision, adding that the CAFTA agreement signed by former president Bush did not include strong international labor standards. It will be interesting to see how Democrats, the AFL-CIO and other labor unions will react to any potential trade deals in the future. That is, will they continue to work within the free trade deals by lobbying to enforce labor rights, or will they continue to oppose the entire framework as they have in the past?