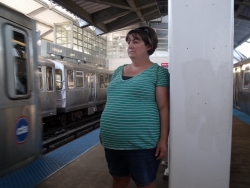 June 23 was a big day for Rhonda Hartwell, until recently a teacher at the Chicago Math and Science Academy, a charter school in the city’s diverse Rogers Park neighborhood. CMSA is run by the national organization Concept Schools, as Kim Bobo described in this Working In These Times piece.

At 3 p.m. that day, Hartwell—eight and a half months pregnant—had a meeting with principal Ali Yilnaz to review her performance evaluations, which were stellar. She specializes in adapting curriculum for students with low level learning disabilities. She also planned to discuss her ideas as advisor to the school’s Junior National Honor Society chapter and her scheduled presentation to the school board that evening.

At 3:30 p.m., Hartwell, 32, planned to join other teachers marching into the office to present the results of their card check union election, wherein 67 percent of 55 eligible staff had signed affirming their desire to join the Chicago Alliance of Charter Teachers and Staff (Chicago ACTS), an affiliate of the Illinois Federation of Teachers and the American Federation of Teachers that represents eight other Chicago charter schools.

Hartwell said the meeting with Yilnaz began well, as he praised her performance evaluation – with a top rating of five in every category, she said – and called her a model for other teachers. But then he had some bad news: the school was terminating the contract she had already signed to teach this coming year. Though teachers must pay penalties in the thousands of dollars if they decide to switch schools after signing a contract, employers are able to break the contracts.

Yilnaz told her it was because of state budget cuts, Hartwell said. But she is sure the move was retaliation for her leadership role in the union campaign. Hartwell said she was the only person to have an already-signed contract terminated, and that state budget cuts affecting schools are actually lower now than had been projected when she negotiated and signed her contract.

“I was the one who initially contacted (the union), I met with them on a regular basis,” she said. “One other teacher and I contacted the entire organizing committee. I had union meetings at my house.”

Toward the end of the 2009-10 school year, CMSA decided to cancel and/or not to renew a number of teachers contracts for the upcoming school year due to budgetary concerns. One of those teachers was Rhonda Hartwell.  CMSA strenuously denies that it decided not to renew Ms. Hartwell’s employment contract based on any alleged union organizing activity in which she might have engaged.

Chicago ACTS has filed unfair labor practices charges alleging Hartwell was retaliated against for protected organizing activity. Union leaders say Hartwell’s situation is an important battle in a larger struggle over the future of unions in charter schools, which are increasingly being adopted nationwide as part of the public education system.

Illinois state law states that public school teachers can join a union through a card check election, hence labor leaders say this should be the case at charter schools like CMSA that receive public funding. CMSA’s own website describes it as a public school.

But charter schools are typically run by private corporations or nonprofit organizations that often seek to block unionization. CMSA’s attorneys have argued their teachers are private employees, and the school filed a legal challenge to the Illinois Educational Labor Relations Board’s ability to regulate charter schools, according to Chicago ACTS.  The school’s website said it filed a petition on June 29 with the National Labor Relations Board seeking to clarify whether the union can represent CMSA teachers. A hearing is scheduled Aug. 12.

Last week Hartwell – now mother of a newborn – joined her fellow teachers in visiting Yilnaz to demand union recognition and to demand her job back. She says:

We felt we needed a union because we wanted a formal voice in school-based decisions, to be an advocate for our students, we felt weren’t being treated as experts in our field. The teachers at Chicago Math and Science Academy are phenomenal teachers – they work hard, they put in extra time because they want to. They tutor their own students, do home visits, contact parents on a regular basis. They’re very good at their jobs. But they are treated as if they’re replaceable. There’s a sense that if they were to ask a question or offer an idea that wasn’t what the administration wanted, they would be told to either do it our way or go somewhere else.

She added that Yilnaz “always talks about the union as a ‘third party.’”
“It’s not a third party,” she said. “It’s us. We want to continue to be represented by Chicago ACTS, and I want my job back.”