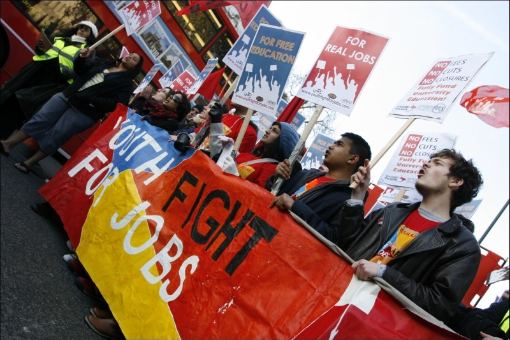 There's an unemployment line circling the globe that's about 80 million people long, stretching far into the next generation.

The International Labor Organization reports that the youth unemployment rate around the world edged up to a record high of 13 percent in 2009, more than one percentage point up since 2007.

Remarkably, relatively "advanced" economies have seen some of the biggest jumps in youth unemployment. Across the Developed Economies and European Union countries, close to 18 percent of youth are unemployed. Spain and the United Kingdom show high rates of "discouragement" among young workers slipping out of the workforce altogether, just as their governments embark on fiscal tightening programs that could shed yet more jobs.

According to the ILO report:

While an unemployment crisis is swelling among American youth, especially youth of color, countless young people in poorer nations are far more desperate for any work they can get in hopes of staving off destitution. The ILO notes that "in developing economies, where 90 per cent of young people live, youth are more vulnerable to underemployment and poverty." Luckier young workers will see wages and hours cut. Those seeking scarce jobs will be pushed toward precarious, informal-sector, rather than work that provides a career path or at least a steady paycheck.

Women and girls, including many who are already relegated to informal and marginal labor, may see a setback in progress on women's economic empowerment. In the Middle East and North Africa, where unemployment is projected to increase through 2011, there remains huge gap between men and women's participation in the workforce.

These trends have wide ripple effects. "An inability to find employment creates a sense of uselessness and idleness among young people that can lead to increased crime, mental health problems, violence, conflicts and drug taking," the ILO warns. In response to financial crisis, governments may exacerbate the problem by cutting vocational training programs. Access to health care could dwindle further. Young women whose educations are disrupted by the crisis may end up having children earlier. In turn, the ILO says, “The fact that the pregnant youth is forced to terminate her education brings longer-term consequences in terms of lost earning potential which in turn affects investments in the health, nutrition and education of the next generation of youth.”

Young workers' struggles have aggravated the clash between social pressures and financial realities. In Egypt, for example, many young men are stuck in limbo, bogged down by bleak economic prospects, unable to marry and start a family. In a 2008 article about growing religious devotion among disaffected Egyptian youth, the New York Times' Michael Slackman reported:

Depression and despair tormented dozens of men and women in their 20s interviewed across Egypt... who once hoped education would guarantee him social mobility. Their stifled dreams stoke anger toward the government.

“Nobody cares about the people,” Mr. Sayyid said, slapping his hands against the air, echoing sentiment repeated in many interviews with young people across Egypt. “Nobody cares. What is holding me back is the system. Find a general with children and he will have an apartment for each of them. My government is only close to those close to the government.”

That sentiment was echoed by Bimba, a 26 year-old college graduate in Guinea, who explained his fading hopes in a United Nations news report:

If change is going to come here, it is going to come with violence. Me, I would take part. I could not ignore the chance to make a change.... Ninety nine percent of my friends are in the same situation as me. We are all tempted not to make change but just to leave, to go to France or the United States. We see the television and see many Africans in Europe. I had a friend in college who left in the second year and now he has a villa and land here, while those of us who stayed have nothing. I don’t know anyone who has been able to achieve the same things here. Here we just survive and get nothing for it.

The frustration isn't limited to youth in any specific region or culture—it reflects the widespread collective disillusionment of a dream deferred, as the promise of economic development shrivels into a relic of past generations.

The ILO recommends various policy interventions, such as targeted job training programs and infrastructure projects to stimulate employment. But those measures depend on whether the global market economy has the capacity to absorb the millions of youth whose potential goes to waste each day--at a time when skilled workers are critical for dealing with the economic and social challenges of globalization.

Even if the hardest-hit countries eventually see their markets bounce back, the rising generation must still bear the weight of an irrecoverable opportunity cost.