90 Years After Suffrage, Impoverished Mothers Need Another Kind of Equality 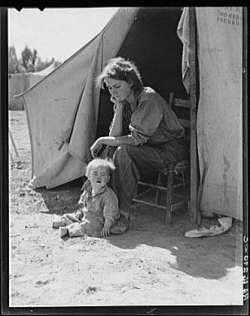 Just in time for Women's Equality Day, a new study has dampened the anniversary of women's suffrage 90 years ago by highlighting the despair of women in poverty today.

The study by the Washington, D.C.-based Urban Institute decisively links depression, economic struggles, and family well-being. The Washington Post explains, “researchers reported that one in nine infants in poverty had a mother with severe depression and that such mothers typically breastfed their children for shorter periods than other mothers who were poor.”

Researcher Olivia Golden told the Post, "A mom who is too sad to get up in the morning won't be able to take care of all of her child's practical needs,” including constructive play with the child that fosters intellectual development.

The recession has unleashed the assault of poverty across the country: a recent analysis by the Center for American Progress and Women's Voices, Women Vote shows that economic instability disproportionately impacts unmarried women. Depression is a reasonable response for the countless single moms who have to worry constantly about where next month's rent will come from.

These findings affirm previous research on the psychologically corrosive impacts of family poverty. Mental health advocacy groups have reported that in the midst of the recession, unemployment and pay cuts raise the risk of severe mental illness.

An in-depth study on economic mobility by the Pew Economic Mobility Project found that children growing up in high-poverty neighborhoods tend to face similarly bleak prospects throughout their lives. For black families condemned to these economic barriers, all the rosy assumptions underlying the American Dream were turned on their head:

Neighborhood poverty alone accounts for a greater portion of the black-white downward mobility gap than the effects of parental education, occupation, labor force participation, and a range of other family characteristics combined.

The Urban Institute study adds a psychological dimension to the vicious cycle of economic distress. The study comes out the same week as a survey of survivors of Hurricane Katrina that links the trauma of the disaster, economic hardship and children's emotional disturbance. Children's mental health is also shaped by their parents' emotional turmoil as they struggle to cope. Whether or not the Gulf Coast recovers economically, a young child who has already spent his most formative years in a landscape of hopelessness (now doubly devastated by the BP oil spill) may never heal from the the scars of Katrina.

The racism embedded in these dilemmas rubs salt in the wound. Sociologist Francis Adeola of the University of New Orleans explained in a 2009 article that disaster-related mental health vulnerabilities loom larger for blacks than for whites, from depression and anxiety to family conflict.

Among the women studied by the Urban Institute, the Post reports, “The severely depressed group was 44 percent white, 30 percent black and 21 percent Hispanic.” These mothers were also at high risk of domestic violence and drug abuse. Such crises often entangle poor families of color in the child welfare or criminal justice system.

What makes this research especially stunning and ironic on Women's Equality Day is that it shows what feminism hasn't done since women won the right to vote. So few poor mothers will see reason to celebrate civic citizenship in the absence of economic citizenship.

NOW celebrated Women's Equality Day by calling for a revitalization of the Equal Rights Amendment, which would build upon the 19th Amendment with a full constitutional guarantee of equality before the law. The ACLU and the AFL-CIO renewed their call for legislation to close age-old gender wage gap underlying women's economic marginalization. Activists continue to push for incremental state-level reforms as well, like paid sick leave to accommodate working mothers' family responsibilities.

Ninety years on, equal access to the ballot still hasn't yielded fairness in the workforce. Although the women's vote marked modern progress, modern women seeking to overturn economic patriarchy today need something on the order of a revolution.