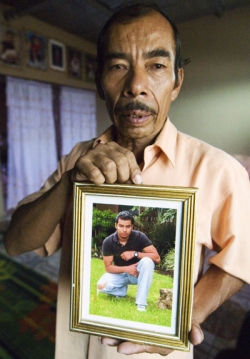 A relative of Gilmar Castillo Morales, one of the three Guatemalans identified among the victims of the slaughter of 72 illegal migrants in the Mexican state of Tanaulipas, shows his picture, on August 27, 2010.   (Photo by JOHAN ORDONEZ/AFP/Getty Images)

Many of the 72 migrants found dead recently in a drug hideout in Mexico were probably like the rest of those moving at this moment somewhere along one of the world’s longest job shape-ups.

If you are reading this in the morning, they have been moving all night since there’s less chance of getting caught in the dark. If it is the afternoon, they are resting. But their eyes don’t.

They are looking northward.

The line-up begins at the southern U.S. border and stretches across Mexico and Central America and on down through Latin America. Sometimes it also picks up jobseekers from other continents, who are as desperate to join the American dream.

Most of these people headed north are a cut slightly above those around them. That’s because it takes guts and ambition to make such a deadly trip. It also has become extremely expensive lately, especially for those coming from beyond Mexico. To pay the smuggler’s fees, they will have to borrow thousands of dollars and agree to pay it back with hefty interest soon after starting work in the U.S.

Men used to be the only ones on this long gruelling line-up, but lately there are more and more women. They have joined it because poor women across Latin America are increasingly taking on the burden to support their families when their husbands can’t. Indeed, 14 of the 72 murdered migrants were women.

Despite the deaths and abuse along the way, despite the message from countless officials in their home countries that the American dream has become the American nightmare for migrants, they keep coming.

People like the 17-year-old Ecuadoran who was the only survivor of the migrants’ slaughter in a gang hideout about 100 miles south of the U.S. border. The migrants, apparently nabbed by the gangs as they headed north, reportedly couldn’t come up with their ransoms and they didn’t agree to work for the nacrotraffcantes.

Back home, his 17-year-old girlfriend, who is four months pregnant, told AFP that he had headed north from their mountaintop village, hoping to find work in Los Angeles so they could get married and build a home. He paid $15,000 to the coyotes (smugglers) for this trip, she said.

Like everyone else, these job seekers are prey for the Mexican gangs that control the roads and railroads, the two ways migrants slowly snake their way northward. Mexico’s National Human Rights commission estimated last year that almost 20,000 migrants are kidnapped while trying to make their way north. And officials with the agency told the Mexican newspaper La Jornada soon after the slaughter that there’s been a rise in kidnapping.

But this is a lucrative business for the drug gangs who charge fees for crossing their turfs and lay down their own laws for the smugglers. They even have the moxie to re-capture migrants who had been freed from their clutches by Mexican officials.

We are witnessing the stunning collapse of Mexico's law and order at the hands of the worst of its own. At the same time, a human tragedy is taking place across North and South America. In many ways the cruelty and abuse suffered by the workers, and the development of the trafficking and hiring parallels the slave trade that once crossed the Atlantic.

But there’s a great difference.

Nearly all of the time, these workers step forward, and pick up their place in this line that snaps them up and takes them to the backs of restaurants in Manhattan or crippling jobs at Iowa packinghouses or the mortuary in Tucson, as did a record number of migrants in July in the Arizona desert.

Not too many years ago, I spoke with a mother in northern Honduras, whose daughter was taken by gangs and sold for food and clothes once they got to northern Mexico. That is all her daughter was worth to them.

I met a young woman near the Mexico-Guatemala border who lost her job in a factory in El Salvador and who left her three children to find work in America. She lost both her legs trying to climb aboard the trains the migrants cling to on their way north from the border.

I met a woman in a U.S. detention facility on the Arizona border, who was caught swimming in the sewer linking an Arizona town with its Mexican neighbor. She told me she was going to get nailed into a wooden box, and hauled across the border on a truck loaded with freight. She was headed for a job in Phoenix and nothing could stop her.

On the Mexican side of the border, an official from Grupo Beta, the Mexican agency that assists migrants, cried as she explained how smugglers, eager to recruit large numbers so they could earn more, regularly encourage men to rape the women traveling in their groups.

I never met anyone along the many miles and borders, who said they doubted if they would find work in the United States.  That, after all, was the reason for their long trip, they said. And until recently they were probably right.

But what they didn’t know was whether they would survive it.