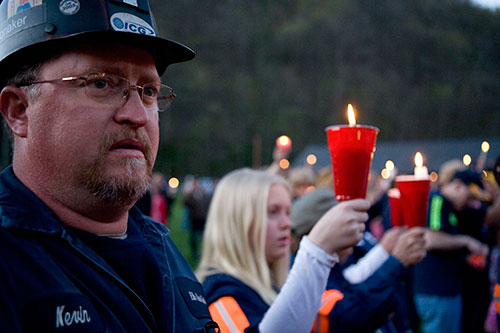 Coverage of the Gulf of Mexico oil spill was right where it should have been this spring and summer, as the environmental disaster became the world's worst offshore oil spill: on the front pages of U.S. newspapers and magazines.

But there has been a gap in the coverage of the catastrophe, which began on April 20 when the Deepwater Horizon oil rig exploded. News reports and opinion polls have barely acknowledged what happened during the explosion itself, as the first barrels of oil entered the Gulf: Eleven workers died and 17 others were injured.

“Workplace safety is too often ignored or accidents taken for granted,” said Tom W. Smith of the National Opinion Research Center (NORC) at the University of Chicago, which last week released a study on public attitudes on workplace safety. “It is striking that coverage in the media and public opinion polls has virtually ignored the 11 workers killed by the blowout and destruction of the drilling platform.”

Of 174 survey questions asked about the oil spill in the two months following the explosion, none asked about the workers killed when the drilling platform was destroyed, according to “Public Attitudes Towards and Experiences with Workplace Safety” (full PDF here), a "meta-analysis" drawing on polls and surveys from the last 10 years. The questions instead focused on environmental issues.

Lack of media attention to worker safety is particularly alarming in the Deepwater case, since that's what caused the disaster in the first place. “If optimal safety had been maintained," says Smith, "not only would the lives of the 11 workers been saved, but the whole environmental disaster would have been averted.”

It's especially striking because a huge majority of workers—85 percent—believe workplace safety is the most important labor standard issue, above family and maternity leave, minimum wage, paid sick days, overtime pay and the right to join a union, according to the study. (Full disclosure: It was commissioned by the Public Welfare Foundation, which funds Working In These Times.)

People likely care so much about workplace safety because it's not abstract: The NORC found in 2006 that "13 percent of workers find their jobs always stressful, while 21 percent find their jobs often stressful." That aligns with the new study's findings that about 12 percent of workers have had an on-the-job injury, and 37 percent have required medical attention for a workplace injury. (It should be noted, though, that the Labor Department said last month that workplace fatalities fell by 17 percent last year, compared to 2008. But that drop is likely a result of the recession and a smaller workforce.)

A few other things stand out in the report:

According to the federal government, in 2008 there were 4.6 million workplace injuries or illnesses and 5,214 fatalities. Those numbers are huge—especially when you consider how few workplace deaths become prominent news stories. It takes something particularly shocking and dramatic—remember the April 2010 Upper Big Branch explosion that killed 29? The 2006 Sago mine explosion that killed 12?—to drive worker safety to the top of the news cycle.

But even then, attention quickly drifts. Initially, the report notes, the Upper Big Branch story "ranked second in public attention behind only healthcare reform, but after the miners were confirmed to have died, attention slipped to fourth place." In a better world, the deaths of workers would mark a new beginning for a story—the real ending being when the conditions that caused the deaths were fully dealt with.

Instead, it seems news coverage, and the public's attention, drifts from disaster to disaster, fatality to fatality, without the sustained attention needed to deal with underlying issues. In the case of the Deepwater Horizon disaster, workers' deaths were quickly overwhelmed by the larger environmental narrative.

The report ends on a stark note:

The lack of serious attention to the problem of workplace safety is underscored by the stark shortcomings in the existing regulatory system. Under the present regulatory set-up, it is impossible to come close to enforcing even the current safety standards. There are about 8.6 million workplaces and just around 2,400 federal and state inspectors (or about one inspector to monitor 3,500 establishments every year).

This sort of shocking statistic usually isn't publicized until another fatal workplace explosion occurs. But if the government can't enforce workplace standards, who else might? Workers, of course. And what could go a long way toward helping workers protect themselves on the job? Unions—at least in the coal mining industry. As David Moberg has reported on this website, mining fatalities have happened disproportionately at nonunion mines during the last 15 years.

Given that fact, you might think that workers would associate the ability to join a union with safety at work. You'd be wrong, which leads me to a sad, and counterintuitive, stat in the report: When asked this year to judge how important it is that the government protect workers' right to join a union, only 43 percent said "very important." (Forty-eight percent said that in 2008.) A larger percentage of respondents deemed every other issue in that survey—family and maternity leave, minimum wage, paid sick days, overtime pay and workplace safety—more important in terms of government protection.

That's very bad news for a labor movement almost always on the defensive, both at work and in the media. It may just be that until a great majority of workers see joining a union as a key to safety, both will remain weak in many American workplaces.