A Day in the Life of a Warehouse Warrior 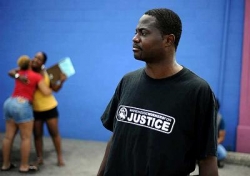 It’s a stifling hot day in June, and Tory Moore, 37, is pounding the pavement outside a currency exchange in Bolingbrook, a Chicago suburb. Wearing a black T-shirt emblazoned with the words Warehouse Workers for Justice, sweating but full of energy, he paces back and forth while mopping his face with a yellow washcloth.

When he sees a likely warehouse worker, he goes up with a friendly greeting and starts asking questions. He also loves to tell his story  – he was a temp for six years, even though he was working at the same warehouse – Del Monte Foods in Kankakee – the whole time.

Moore is one of the driving forces behind the study “Bad Jobs in Goods Movement,“ released by Warehouse Workers for Justice and the University of Illinois at Chicago last month. The campaign hired Moore through a program for low-income workers to help conduct the hundreds of surveys that form the basis for ongoing research into this booming but little-examined industry.

Since becoming involved with Warehouse Workers for Justice, Moore has developed his apparently natural talents as an organizer. He spoke to workers, organizers and academics involved with goods movement issues nationwide at the U.S. Social Forum in Detroit in June.

Outside the currency exchange, he goes through the questions on the four-page blue survey earnestly and methodically, making sure he gets the spelling of people’s names right and reading off all the different types of discrimination they may have faced. When he gets to the question about whether someone prefers temporary or permanent work, his voice becomes more animated and he jumps in to answer for them, “Permanent right?”

“You don’t get any justice if you’re a temp!” he says.

He  takes a quick break to check his messages – the only one is from a temp agency  asking if he can work tomorrow. On principle, he’s not going to take a one-day job, even though he needs the money. But he doesn’t want a refusal to prevent them from calling him with future longer-term offers. So he returns the phone call – politely saying, “I’ll be going out of town so I won’t be able to do it.”

“Well I lied to them, I’m not going to disqualify myself in case something else comes up. I’m not trying to be lazy, but, one day only! I’m not the one.”

Moore is acutely aware of the injustice in the industry, which relies heavily on temporary workers who labor for low wages with few or no benefits, paid sick days or chance for advancement. But in a desperate job market, some see this as normal, and are grateful for any work they can get.

One man, who doesn’t want his name used, is happy to have just gotten a new albeit temporary job.

“I thought that was the game! I didn’t know that was a problem. I thought that’s just the way it was. You work three months somewhere then they move you somewhere else,” the man says.

“That’s right, you’re getting $9.50, then they move you somewhere else where you’re making $8,” says Moore. “I never thought of it that way…”

Moore examines the man’s pay stub, and is enraged to see there’s no company name on it.

“There’s no damn name on here! That’s a problem! Say you need to sue them, you show this to a judge, there’s no name.”

The man rubs his face and looks worried. Moore asks what his new position is.

“I really don’t know, they don’t tell me anything, they just say, ‘See how many of these seasoning packets you can put in a box,’” says the man, who works 2 a.m. to noon. “I was just so happy to get the job.”

Moore tells his story about being a temp for six years, and being denied a loan and apartment rentals. ” Seriously?” says the man, looking crestfallen.  “So when I go look for an apartment I can’t go in and say this is the place I work?”

“A lot of people lost their cribs because the 89 days came and they got laid off instead of hired on. This is a million-dollar company and you’re working your ass off for 9.50,” Moore says.

The man stands absorbing it all for a few moments, asks a few more questions and receives impassioned answers from Moore. The man basically tells Moore that he has ruined his day, but he’s glad to know what he needs to watch out for. He agrees to answer Moore’s survey questions.

“I had to give my Martin Luther King speech,” Moore says, laughing and shaking his head. He wipes his brow again, then starts scanning the parking lot for more warehouse workers.