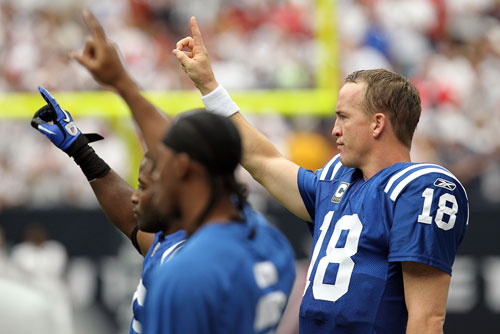 The NFL season opener last Thursday between the defending Super Bowl champion New Orleans Saints and the Minnesota Vikings was a much heralded matchup. But shortly before the teams faced off, players from each side momentarily cast aside their rivalry and banded together in a gesture of labor solidarity by sticking their index fingers towards the sky. The message was clear: We're united to fight for a new contract to our liking.

The brief moment on national television was in response to an impasse happening off the field in which the players union and the league have struggled to agree on a new collective bargaining deal. Players from other teams also followed on Sunday with the same gesture as they conclude the final year of their current contract, which expires next March. Even as the season begins with record setting TV ratings, the possibility of a lockout next year is increasing with each side trading jabs over facts, figures and legal measures.

The league and team owners are hoping to secure a more auspicious contract and opted out of the current one in 2008, alleging that the deal worked too much in favor of the roughly 1,700 players in the NFL. The two sides are at odds over a number of issues including, revenue sharing, salaries and a proposal to add more games to the regular season.

The NFL and its owners from the 32 teams cite the economy for sluggish ticket sales, and USA Today reports that 11 teams are facing television blackouts for not selling out seats for the games. The league also said they want to double the funds for building and stadium operations to support the rising costs, which would cut into the player’s salaries.

But the union, otherwise known as the National Football League Players Association (NFLPA), says that the teams get hefty revenue from the large broadcast deals with the major television networks and say the league is not forthcoming with their financial statements to back up the claim of a faltering business model.

DeMaurice Smith, the union’s executive director, says a lockout is likely since little progress has been made on the negotiating table.  The AFL-CIO has even joined the discussion, and the NFLPA has also started a legal procedure to circumnavigate a lockout by the owners in an effort to avoid the first work stoppage since 1987.

Nevertheless, the tension grew last week when union’s president, Kevin Mawae, announced his retirement after none of the teams offered him a contract during free agency. Mawae, who is a 16-year veteran and appeared in the Pro Bowl for the eighth time last year, was unable to find a spot on a team. He suspects it was because of his role with the union.

The labor strife, however, hasn’t fared well with the fans. One ESPN reporter described it as a dispute between the “millionaire players” and “billionaire owners.” Some fans even booed the players when they raised their fingers over the weekend.

However, while The Nation’s sports writer Dave Zirin acknowledges the negative fan reaction, he also says that popular opinion favors the players this time. Players aren’t the ones striking, there is increased awareness towards health issues, and the residual economic effects of a lockout for stadium workers and sports-related businesses will shift sympathy for the union, he says.

Football often provides a respite away from the economic troubles, so watching players who average $1.9 million a year is a financial disconnect from many of the viewers. With support for labor unions low, it’s not surprising to have this sort of reaction. But aside from the large pay disparity, I’d argue that the players union’s concerns are quite similar to the labor problems ongoing across the country at a time when wage and benefit reductions have become more frequent.

The NFLPA’s concerns on protecting health coverage and pensions, fighting calls to reduce salaries in spite of league profits, and tacit cases of worker intimidation such as what happened to Mawae is emblematic of larger workplace issues, albeit on a much different financial scale.