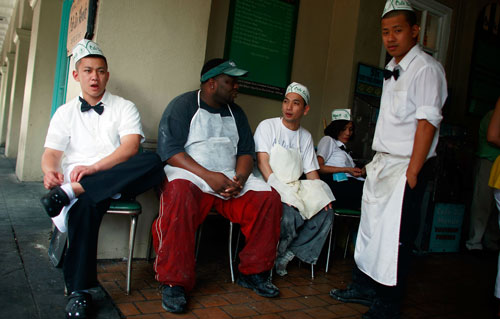 Waiters take a break at Cafe du Monde in the French Quarter in May 2009 in New Orleans, La.   (Photo by Mario Tama/Getty Images)

Jose Oliva waited till close to closing time when he went up to the three workers and politely introduced himself.

They were dumping garbage in back of a New Orleans restaurant where Oliva’s group, the Restaurant Opportunity Center (ROC) has been talking to workers for the last year. But the work with the restaurant’s Spanish-speaking staff had been going slow, so Oliva was on hand to help out.

“They reacted to me like I was a threat,” he recalls. “They said ‘We don’t want to get in trouble’ and ‘please leave.’’’ But just as he was walking away, one of them shouted out for Oliva to come back when the French Quarter restaurant was shut, and they would talk with him then.

Their reaction was very different when he came back.

“They said they couldn’t believe there is a group out here who cares about restaurant workers and immigrants,” Olivo says.

ROC does indeed care about workers like those in New Orleans, as well as the rest of the nation’s 13 million restaurants workers, the largest single group of workers in private industry.

Amid the dark skies that have been closing over organized labor for some time, Oliva’s group is a ray of hope and a reminder of how innovation and grit can bring success.

Oliva, based in Chicago, is the national policy coordinator for seven ROC locations across the United States. They are linked together by ROC United, which got its start among the surviving workers on the Windows on the World restaurant at the World Trade Center.

The first ROC started in New York City as a support group for the restaurant workers who were struggling to get back on their feet. UNITE-HERE officials supported the idea of forming the group and a member of the union sits on the organization’s board of directors, according to Oliva. But his group is not funded by the union, he adds.

Since its founding, the group has relied on its links with religious and labor groups to apply pressure to restaurants where workers face troubles. It has signed settlements stipulating better workers conditions with recalcitrant restaurants and begun also to form a national cadre of so-called high road restaurants, where the workers are treated well.

Oliva, born in Guatemala, gained his organizing experience working locally in Chicago and nationally with the Interfaith Worker Justice organization.

His conclusion from his years working in Chicago and nationally is that the labor movement goes through cycles. In the 1930s, he says, immigrants from Eastern Europe added drive to organized labor’s push for recognition.

So, too, immigrants nowadays are the force behind organizations like his. Even in tough times like these.

Which gets back to his encounter with the workers in the back of the New Orleans restaurant.

“The dire situation makes organizing harder. You come up to workers and they are scared," he says. "But it not a paralyzing fear. That is what makes me hopeful.”