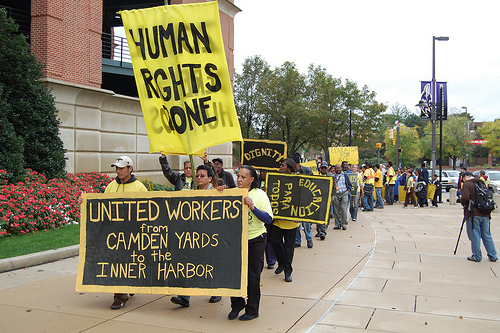 BALTIMORE—The hundreds of workers who staff crab shacks, souvenir shops, night clubs and ice cream stands in Baltimore’s Inner Harbor are accustomed to serving visitors from around the country who flock to the historic brick and cobblestone waterfront. But now these workers are visiting cities nationwide to share their demand for an Economic Human Rights Zone in the tourist-friendly area marketed as the “crown jewel of Baltimore.”

The Inner Harbor is a lynchpin of the tourism industry, which has become an economic mainstay as Baltimore’s once thriving manufacturing and shipping industries have sharply declined.

But the hundreds of workers who keep these establishments running earn poverty wages with few or no benefits, working when they’re sick and always scrambling for enough hours over the busy summer season to survive the winter. Hence the demand for an Economic Human Rights Zone, where all 1,000-some workers must be paid a state living wage with access to subsidized health care and education.

The campaign is driven by the United Workers Association, which grew out of a three-year-long struggle among largely homeless day laborers who worked for about $4.50 an hour at Camden Yards stadium.

After a lengthy public pressure and community organizing campaign, those workers finally won an agreement from the Maryland Stadium Authority in 2007 granting them direct-hire jobs with a state living wage and benefits. They later organized with AFSCME, and the United Workers Association – including workers from the stadium struggle -- took the spirit of that fight to a new arena.

United Workers first called for the economic human rights zone in 2008 and originally planned to target individual restaurants and retailers one after another, starting with an especially problematic chain called Phillips Seafood which required employees to buy company cups just to drink water on the job.

They later decided to instead target the major developers which run the Inner Harbor malls, namely General Growth Properties (GGP), the nation’s second largest mall operator, and developer David Cordish, whose century-old family company runs the Power Plant mall housed in an old brick coal-fired plant.  The Cordish Companies website refers to Cordish as “the king of urban makeovers” who “drives a hard bargain but delivers fresh, vibrant developments, succeeding where others have failed.”

While targeting GGP and Cordish with the idea of an economic human rights zone, UWA is also helping workers fight battles specific to their workplaces within the Inner Harbor. For example this summer ESPN Zone closed its restaurant abruptly without giving workers the advance notice or severance pay mandated by the WARN Act. Workers discovered that the company had planned not to notify them at all, except word leaked out in the media and over Facebook. Then the company ended up giving them a week's notice.

"We would have just come to work one day and all the doors would be shut and locked," said Leonard Gray, 28, who had worked there for six years. "That's just disrespectful. When they closed a lot of people had to look for any job they could really quick, some people had to move, take their kids out of day care, a lot of people stopped going to school, one friend had to move back to New Jersey to a neighborhood with a lot of drugs."

United Workers organizer Ashley Hufnagel said the group is not against development but rather pushing for “fair development” that benefits workers along with tourists and developers. GGP’s website features words including honesty, loyalty, integrity and respect dancing across the scene to music – Hufnagel says those are the qualities they want developers to live up to.

On Oct. 10 Inner Harbor workers and supporters will visit a GGP waterfront mall in lower Manhattan known as South Street Seaport, to coincide with a faith-based day of action for human rights and labor rights sponsored by The Micah Institute.

Earlier this month, United Workers members were in Chicago – joined by the local Arise Chicago Workers Center -- delivering a letter to GGP’s corporate headquarters and demanding a meeting with company officials. No one from GGP met with them in Chicago and the company so far has not responded, according to Hufnagel. In coming months they plan to visit GGP malls and meet with groups involved in similar struggles in Washington D.C., Philadelphia and other cities, along with making return visits to Chicago and New York.

"It's not just about the Inner Harbor," said Gray. "Workers should get a living wage everywhere. We deserve it."

The campaign is inspired in part by the Coalition of Immokalee Workers’ strategy of targeting “the top of the profit chain,” in Hufnagel’s words. In the Immokalee workers’ case this means fast food outlets or grocery stores like Taco Bell and Publix, which profit from the tomatoes picked by migrant workers. In United Workers’ case, this means developers like GGP and Cordish which Hufnagel calls “the Oz behind the curtain, this invisible hand.”

“People see these brands like Cheesecake Factory but don’t see the development companies at the top controlling everything,” she said.

The Inner Harbor campaign is also part of a larger effort to end poverty in Baltimore and the wider world, based on “poor people’s movements” launched in decades past wherein homeless and otherwise disenfranchised people organize both to meet their own needs and also to affect larger socioeconomic change.

Literature from United Workers notes that in Baltimore, as in Rust Belt cities, nationwide:

The service economy has replaced manufacturing as the base of employment. Across the country, the service sector employs millions at shopping corridors, stadiums and tourist zones, locations that go virtually unregulated by labor laws or include special exemptions like the restaurant industry tip credit.

The Inner Harbor is really the new sweatshop factory floor of the early 21st century – without union or governmental protections, workers who run this tourist mecca are extremely vulnerable to human rights abuses that include being forced to work off the clock, no access to health care or sick leave and barriers to education.

The bill of Economic Human Rights would specifically mandate that the developers (GGP and Cordish) require their tenants to pay a state living wage (now $12.25 per hour in Maryland) to all employees and contractors. The developers working with the tenants would also provide programs offering at least $500 annually each for health care and education. Specific providers would be contracted to provide these services, and workers would have a say in and veto power over which provider is chosen and how the program is structured.

Employers would also be required to treat employees including all contractors and sub-contractors with dignity and respect, including an end to sexual harassment and the arbitrary and often retaliatory scheduling that makes it extremely difficult for workers to go to school, hold a second job or maintain a stable personal routine.

United Workers notes that the developers of the once-blighted Inner Harbor have received substantial taxpayer subsidies to revitalize the area and attract lucrative outlets including The Cheesecake Factory, Hard Rock Café and ESPN Zone.  Many cities are likewise in the process of reviving once-industrial riverfronts or harbors with restaurants and shops – often hiring the same developers -- hence the Baltimore campaign could provide a literal blueprint for other similar efforts.

“The Inner Harbor is so symbolic for a city like Baltimore,” said Hufnagel. “It’s the heart of the city, and really a model replicated across the country with different waterfront tourism malls.”

Though new development in the area is ongoing, the Inner Harbor has been such a destination for more than three decades.

“Oftentimes people think when it comes to development you need to stop them before they get here,” said Hufnagel. “But transforming a development that already exists allows us to devote the time to building up a base of workers who are organized and committed to securing economic human rights at the harbor and building a larger movement to end poverty.”