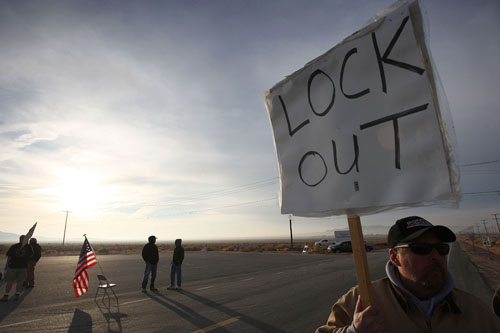 Workers at the front gate of the Rio Tinto Borax mine after mine owners locked out 540 employees and called in replacement workers in February in Boron, Calif. Rio Tinto is the largest open-pit mine in the state and the second-largest boron mine in the world.   (Photo by DAVID MCNEW/Getty Images)

A survey of recent strike activity reveals employers are taking full advantage of the greatest economic crisis in decades. In August, the Federal Mediation and Conciliation Service's list of ongoing labor disputes around the country included only 41 strikes or lockouts.

Some were relatively large high-profile disputes, such as the strike against Mott's apple sauce company in upstate New York. Most, however, were small local disputes, involving fewer than 100 workers. For example, Teamsters in Upper Marlborough, Md., struck Daycon Products in April 2010 to resist a proposed two tier-wage scale. The strike continues today.

The common theme: employer demands for concessions. For example, 400 Teamsters struck Aggregate Industries in Massachusetts and New Hampshire in mid-August. A chief demand of the company was changes in work rules, including ceasing to guarantee a full day’s work. The strike, which ended after eight days, maintained healthcare and pay but included unspecified concessions in work rules. By extending the picket line to other facilities and drawing on international support, the Teamsters were able to beat back some, but not all, of the employer demands.

Another trend: employers taking advantage of high unemployment demanded concessions even when they were not losing money. Thus at Motts, despite being profitable, the employer demanded takebacks on healthcare, pension and wages. As The New York Times reported:

Tim Budd, a 24-year employee who belongs to the union’s bargaining team, said he was shocked by one thing the plant manager said during negotiations. “He said we’re a commodity like soybeans and oil, and the price of commodities go up and down,” Budd recalled.

Some of the disputes were short affairs lasting days, while others have dragged on for months. The most noteworthy lengthy strike included Spectrum nursing home workers in Massachusetts, who are represented by SEIU. After working without a contract for a year, the healthcare workers struck on April 15, 2010. The employer refused to agree to the same contract provisions as other nursing home operators in the state.

On August 31, 2010,  the union made an unconditional offer to return to work. Spectrum allowed only nine workers to return, having already replaced the remainder with scabs. The union is hoping a combination of National Labor Relations Board charges, plus community pressure, can force a change in the employer position.

A concerning development is the use of the employer lockout to obtain concessions. In several high-profile work stoppages, employers locked out workers to force them to agree to concessions. Thus, 59 workers at the Castleton Country Club in Pleasanton, Calif., remained locked out since March, facing an employer demanding workers pay $739 per month for family healthcare.

Perhaps the highest profile ongoing dispute is Honeywell’s lockout of 220 uranium workers in Southern Illinois. Honeywell is demanding the elimination of retiree health insurance as well as major increases in insurance costs. Unions and community members are justifiably concerned about the use of scab labor in a highly sensitive uranium conversion plant.  Particularly galling is management’s demand to end retiree medical benefits for retirees exposed to uranium for decades.

Earlier in the year, a high-profile lockout of miners at Rio Tinto resulted in, at best, a draw. The union was able to beat back some of the concession with a massive outpouring of international solidarity. However, the employer managed to abolish the pension plan for new hires and won work rule changes.

The only way to win is to fight

So what conclusions can we draw from this review of strike activity? The first is the relatively low level of strike activity. In the face of a system of labor control constructed to forbid effective strike actions, most unions are choosing not to strike. Those that do face tremendous odds. In many of the strikes, management has shown little hesitation to hire permanent replacement scabs.

Second, the labor movement can no longer ignore the need for new strike tactics. As I wrote on this site previously, the modern version of the strike lacks the two essential components of the traditional strike— workplace-based solidarity and the ability to stop production. Stable collective bargaining requires an effective strike.

Finally, despite the odds, courageous groups of workers are willing to take a stand against corporate greed. Facing permanent replacement by scabs and a system of labor law stacked against workers, these workers fought back. Although the results have been mixed, in some cases they were able to beat back the worst of the concessions.

That willingness to fight, coupled with correct tactics, is the only hope for the revival of the labor movement.