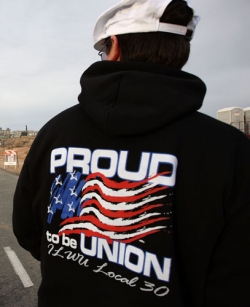 The pursuit of happiness: A locked-out union worker in Boron, Calif.   (Photo by DAVID MCNEW/Getty Images)

Even though U.S. public opinion of unions remains low, a new report finds that labor groups nonetheless improve the general well-being for union and non-union citizens in several industrialized countries.

The findings appear in the September issue of Social Indicators Research, a journal which focuses on quality of life measurements. They highlight a link between union density and life satisfaction based on data from fourteen developed nations.

The researchers (three American academics) used individual and aggregate data to measure what effect unions have on the overall happiness of the country and their citizens using a measurement known as “subjective well-being,” a scientific concept that evaluates quality of life or general happiness. They found that organized labor is a boon to the well-being of those who live in industrialized regions in places like Europe, Japan and Australia.

The findings are a bright spot for labor groups at a time when union membership has declined and American public opinion for labor groups have remained low. The results were positive across all sectors from the society to the individual: countries and individuals who live countries with high union densities had a higher level of life satisfaction; union members reported being generally happier than non-union members by one-tenth; and the less fortunate who were union members had the highest improvement in their quality of life.

The study outlines several variables that contribute to an improved well-being, including many that have been touted by labor advocates. For one, unions provide a measure of job security that provides safeguards for sudden layoffs. Secondly, the power of collective bargaining allows for a sense of empowerment through mechanisms like grievance procedures. Unions also reduce a sense of alienation through a support network. Nonunion members and society at large also benefit through a “contagion effect” through inter-personal communication.

Although the total unionization rate in the United States is only 12.3 percent, the research underscores how labor groups are contributing to the quality of life in industrial nations. The big takeaway: life satisfaction is directly related to unionization rates even as public and private sector unions have come under attack in recent years.

But the United States still has a way to go, according to the union coalition American Rights at Work. The group points out America ranks on the bottom on the quality-of life-scale because of small union membership numbers. Employers have also continued to prevent unions from forming in the workplace, leading to lower levels of general well-being.

Unions have indeed been criticized for everything from stifling wages and benefits, influencing political organizing, to hampering economic productivity, but the researchers note that it’s important to consider organized labor as an agent for improving happiness.

If the study rings true, that’s not good for Americans. If membership continues to decline, then the populace faces many unhappy days ahead.