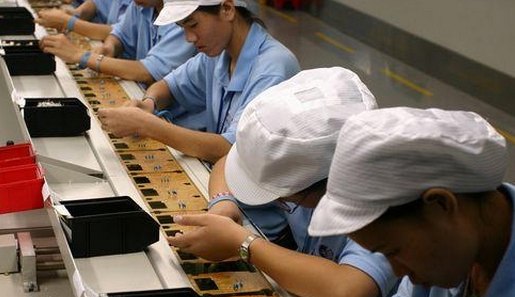 After several young Chinese factory workers killed themselves within a few months in southern China, the media's attention pivoted toward the employer, Foxconn, as an emblem of a globalized production model that devours young souls alive.

The public scrutiny subsided after the company agreed to institute certain reforms, from raising wages to pushing workers to sign a non-suicide “pledge.” But activists have kept the spotlight on Foxconn's shady labor practices and exposed a similar pattern of driving electronics-industry workers in India and Mexico as well.

An investigative report by Hong Kong-based Students and Scholars Against Corporate Misbehaviour (SACOM), in partnership with the international industry watchdogs MakeItFair, GoodElectronics and Bread for All, contends that Foxconn's follies reflect problems rampant throughout a global electronics industry that treats "workers as machines." Yet even tragic deaths have not compelled the company to undertake even minimal reforms, according to SACOM's research.

Employees were due for a major wage increase to CNY 2000 per month, for example, but as of October 11, management has been silent, says SACOM: "Details about the conditions under which workers can benefit from this pay rise, like seniority or type of contract, have not been communicated.”

Foxconn has issued a statement denying any deception, arguing that the new wages are being processed and that “our objective with these increases is to ensure we remain one of the highest paying employers in our industry.”

Yet on the factory floor, promises of pay hikes haven't leavened the Tayloristic atmosphere. While the company says workers' overtime hours generally fall well within the 60-hour limit mandated by the Electronic Industry Citizenship Coalition guidelines, according to SACOM, this evidently means they simply stop counting the extra hours that exceed the cap. One worker in Wuhan said "the management made an order to prohibit workers from recording overtime."

Other testimony from workers indicates that workers are often effectively forced into "voluntary" overtime.

Despite fatigue, workers cannot reject overtime work, because Foxconn requires workers to sign a Voluntary Overtime Pledge. Since the basic wage is not enough for survival, workers have no choice but to earn their living from the overtime premium. Even in the midst of the series of suicides, excessive overtime remained prevalent.

Workers have to repeat the same monotonous and tedious tasks every day. A female worker from the packing department at Hangzhou campus complained that she was totally exhausted after non-stop work. The production target is usually set at 5000 pieces per day. If there is an influx of orders, the target will be raised to 1000 pieces per hour. Production targets keeps soaring. Management always test the capacity of the workers. If workers can finish the quota, the target will be increased day by day until the capacity of the workers maximize.

The draconian management structure keeps the workers in check by enforcing a "culture of absolute obedience,” SACOM says. Workers, who live in dormitories on site, are often subject to intrusive investigations and harassment. Interviewees cited feelings of social alienation, depression, and intense humiliation, in a self-contained micro-society that smacks of paternalistic dictatorship. One worker at the Longhua campus testified, “The authority of the security guards at Foxconn are like the police.”

The Foxconn model is a hit outside China, too, as the company's reach traces the global grasp of its client brands, including Nokia, Apple, Dell, and Sony among others.

It appears that the company is paying less than minimum wages by taking in Trainees and getting the work of a full time worker out of them. There is overtime work on almost all days. Workers have no choice but to work overtime and they are threatened with dismissal if they refuse. Work pressure and production targets are high. Linemen and supervisors harass workers when they slow down or attempt to take short breaks....

The overall policy of Foxconn shows a preference for temporary workers, to deny right to association and to avoid collective bargaining agreements.

Labor unrest, while perhaps more militant in the Indian facilities compared to the southern China sites, runs into similar obstacles from above. Protesters in Chennai reportedly clashed with management last month in an effort by an independent worker group, FITS, affiliated with Centre of India Trade Unions (CITU), tried to challenge the Foxconn-approved establishment union. To break up a sit-down strike, bosses “used police” to round up protesters, ultimately leading to the arrest and suspension of many workers and labor activists according to the International Metalworkers' Federation and the Deccan Chronicle.

Foxconn has burrowed its way to the next hemisphere. The Mexican media reports that Foxconn workers in Guadalajara have been roused by news of the Chinese workers' plight; some staged a solidarity vigil in June, shedding light on parallels between strenuous, precarious factory jobs in Mexico and elsewhere.

SACOM advocate Chan Sze Wan told In These Times that in both Chennai and Shenzhen, Foxconn appears to be colluding with local authorities to suppress labor organizing. SACOM's report dismisses the “official” union apparatus representing Foxconn's Chinese workers as a sham that ignores workers' grievances and fails to educate them about their rights. Sadly, interviews with workers revealed that many knew nothing about union representation or the international manufacturers' codes of conduct that their employer is supposed to follow.

Chan added, “Foxconn as the world's leading electronics manufacturer, it does not translate its influence into responsibility.” But that corporate responsibility, she noted, must also be shared by American client companies like Apple, which should have the leverage to raise standards throughout the production chain.

With hundreds of thousands of employees worldwide, Foxconn's militaristic model is perfectly suited to the evolving workplace culture of the global economy—homogenized, disciplined, robotically efficient. And the workers will keep working at a frenzied pace, not because Foxconn insists, but because brand-name multinational corporations and gadget-obsessed consumers demand it.