Trade Unionists Speak Out Against FBI Attacks on Civil Liberties 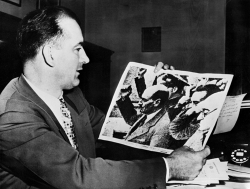 Important labor groups are speaking out against the recent spate of federal attacks on the civil liberties of U.S. peace and labor activists.

On October 1, 2010, the convention of AFSCME Council 5, representing 46,000 public employees in Minnesota, passed a resolution objecting to recent FBI raids of prominent peace and labor rights activists in Minneapolis and Chicago. On October 14, delegates to the Duluth Central Labor Body (DCLB) unanimously adopted a similar resolution opposing the raids. The Duluth resolution "resolved that the DCLB forward this resolution to Midwest-area labor councils and the AFL-CIO and urge these organizations to similarly condemn FBI and DOJ attempts to intimidate and disrupt grassroots social movements." Likewise, the San Francisco Central Labor Council delegates meeting voted on September 27 to denounce the raids and “participate in the ongoing movement to defend our civil rights and civil liberties from FBI infringement.”

On September 24, the FBI raided the homes of seven activists, seizing computers, cell phones and documents. The FBI also raided the offices of the Twin Cities Anti-War Committee, seizing their computer containing a database of supporters. The peace movement nationally has roundly condemned the FBI for attempting to silence dissent. In the weeks following the raids, demonstrators protested in dozens of US cities.

The FBI also issued subpoenas requiring the activists to testify before a grand jury in Chicago. Many of those subpoenaed are trade unionists. The AFSCME Council 5 resolution noted that four of the subpoenaed activists were members in good standing of ASCME Council 5. The San Francisco CLC resolution made note that among the Chicago activists subpoenaed was Joe Losbaker, a longtime SEIU chief steward at the University of Illinois Chicago and a stalwart in the Chicago labor solidarity scene.

They are also workers, parents and homeowners—real people who face  real consequences and a terrible choice: If they refuse to cooperate with this illegitimate fishing expedition, they face imprisonment. This jeopardizes their jobs, their homes and their families. All have informed the grand jury they will refuse to testify.

The FBI raids came the same week the Department of Justice’s Office of Inspector General criticized the FBI (PDF link) for engaging in surveillance of domestic peace groups, including the pacifist Merton Center. The report found no compelling reason for the FBI infiltrating and conducting surveillance of these domestic groups.

Why this a trade union issue

Both the AFSCME resolution and the San Francisco Central Labor Council noted the importance of trade unionists speaking out on the issue. The AFSCME Council convention expressed

its grave concern that the recent FBI raids are reminiscent of the Palmer Raids of the 1920s, the McCarthy hearings of the 1950’s, and the FBI’s harassment of the civil rights movement, and our grave concern that these raids be the beginning of a new and dangerous assault on the First Amendment rights of every union fighter, international solidarity activist or anti-war campaigner.

From the Industrial Workers of the World’s (IWW) fight for free speech in the 1910s to the major labor-inspired civil liberties court decisions of the 1930s, the labor movement has often been in the forefront of defending the right to speak and protest. Trade unionists understood that without the ability to speak out, union efforts would be crushed. Of necessity, the fight for civil liberties went hand in hand with the fight for workers’ rights.

In 1909, when the city of Spokane, Wash., outlawed speaking on street corners, IWW members, known as Wobblies, put out a call to protect free speech. Hundreds of Wobblies rode the rails into town and filled the jails, forcing city officials to retract the law. In 1914, when a Federal Court seized the homes of 140 union members, intending to auction them off and turn the proceeds over to their former employer, Samuel Gompers asked every member of the AFL to donate an hour’s pay to a fund to buy those homes and return them to their rightful owners.

Many of the key Supreme Court decisions regarding the right to protest grew out of the labor struggles of the 1930s. When the CIO tried to organize unions in Jersey City, New Jersey, the notoriously corrupt mayor, “Boss” Hague, suppressed union meetings and had CIO leafleters arrested. The CIO obtained a federal injunction against Hague, and the case eventually reached the United States Supreme Court. In the landmark decision, Hague v. CIO, the Supreme Court in 1939 upheld the view that parks and streets were public spaces where activity protected by the First Amendment was permissible.

Trade unionists continually faced government repression. During World War I, labor organizers were prosecuted under state “criminal syndicalism” laws, which made it a felony to “advocate damaging an employer’s business.” After the war, the trade union movement was decimated by harassment and raids by the federal government, known as the Palmer raids.

In the late 1940s, the CIO’s campaign to organize workers in the South, “Operation Dixie,” was plagued by local authorities’ harassment and arrest of organizers. Likewise, during the 1950s some of the best labor organizers were hounded by the FBI, fired from their jobs, and driven from the labor movement.

Confronting power and privilege has never been popular in the United States. Anyone who has gone through a bitter strike knows all too well how the courts, the media and the government line up against striking workers. That’s why, as it has historically, the trade union movement must be at the forefront of  defending the right to dissent. For more information, please go here or here.

This post has been updated to note the October 14 DCLB resolution adoption.