Under Obama’s Reforms, Can We Restore Community to Community College? 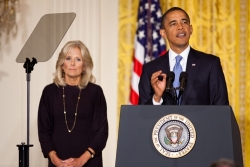 President Obama speaks at the White House Summit on Community Colleges on October 5. The event was convened by Dr. Jill Biden to highlight the role that community colleges play in developing America's workforce.   (Photo by BRENDAN HOFFMAN/Getty Images)

The plan, however, might dismay advocates of the traditional liberal-arts curriculum, since Obama's “Skills for America's Future” initiative, according to Bloomberg, will build “partnerships” between community colleges and companies like McDonald’s, GAP Inc. and Pacific Gas & Electric, in order to shuttle trainees into brand-name jobs as efficiently as possible.

According to Bloomberg, Obama administration spokesperson Dan Pfeiffer called education “the economic defense budget for the 21st century... the only way that we’re going to be able to be competitive with India, China and other countries.”

But while America embarks on that march of progress, do we lose something by conceptualizing students as footsoldiers in the battle for "global competitiveness" or a line-item in the "economic defense budget?" (Rick Ayers suggested a similar military streak behind K-12 education-reform campaigns on Democracy Now!)

On all tiers of the education system, the reform discussion polarizes between clashing concepts of education as a public good, versus education as a vehicle for economic mobility. Public schools and colleges in turn become frontlines for proxy wars over private and public control of a fundamental social resource.

At the cusp of public and private social advancement, the two-year community college is often looked to as a channel into the white collar world. But Obama's initiative should prompt some rethinking of how to apply the liberal arts and enlighten “practical” knowledge. Education scholar Mike Rose recently wrote in Inside Higher Ed:

[W]hat I’ve found as I’ve closely examined physical work is its significant intellectual content. This content is no surprise if we consider the surgeon, but the carpenter and the hair stylist and the welder, too, are constantly solving problems, applying concepts, making decisions on the fly. A lot of our easy characterizations about work just don’t hold up under scrutiny. Hand and brain are cognitively connected....

We need to work harder than we have yet to create a vocationally oriented education that at its core involves the intellectual, civic, and social goals too often found only in liberal studies.

Vocational training has earned its “dumbed down” reputation in part because society dismisses craft and industrial work as functionally dumb. Unfortunately, yes, capitalism promotes mind-numbing assembly-line labor and rote service work. And community colleges, as a resource for building job skills, naturally accommodate those manpower demands. But could education be turned into a countervailing force--to make work more intelligent, instead of dialing down cerebral aspirations?

There's no irreconcilable divide between training a worker for a decent job and training her to engage a novel or interpret an oil painting.

But the current community college system, underfunded and disjointed, seems ill-prepared to churn out the White House goal of 5 million degrees and certificates by 2020. On the quality of post-secondary public education, Rose told In These Times, “The unfortunate thing is that often vocational programs are narrowly conceived and provide only job training (and sometimes not very good job training) and do not consider the other educational possibilities that a vocational program could generate.”

Pushing the boundaries of vocational instruction requires finding ways to enrich the lives of working people, as workers and as human beings. “Training” does not preclude holistic or experiential learning that is both hands-on and intellectually challenging. Logistically, maximizing access without compromising rigor might be achieved in part through technology, such as a low-cost “virtual” model in the vein of Carnegie Mellon's Open Learning Initiative.

Sara Goldrick-Rab, a professor of Educational Policy Studies & Sociology at University of Wisconsin-Madison, told ITT that the sheer demand for community college-level education has created an opening for reform as well as a pretext for narrowing access to resources:

[Community colleges] are being asked to do so many different things at once, and with a paucity of resources. Something's gotta give--and I fear that something is accessibility. Right now doors remain open, but access to high-demand courses is low because colleges have neither the space nor the instructors. We need to rethink instructional approaches in public higher education, or risk having to turn the keys over to the for-profit [institutions].

For example, Education Trust recently analyzed California's community colleges and found a deep gap in the rate of transfer to four-year colleges between students of color and their white peers. Such statistics point to an overlooked value of community colleges as a lever for correcting historical injustice, not just a “diploma mill,” especially for students whose economic and educational destinies have been shortchanged by failing public schools all their lives. In a just education system, they'd be able to experience more than McCollege.

In a National Journal roundtable, Steve Peha of Teaching that Makes Sense warned that piecemeal reforms in community colleges portend an even greater uphill climb: making an AA degree worth more than the paper it's printed on. “To make it easier for people to get credentials,” he remarked. “we may ironically make it harder for them to acquire what those credentials represent.”

Imagine if every community college truly belonged to its community. A space for working people not only to learn a meaningful trade but also to grow as an active community member, parent, or voter? Broad inclusion and high expectations in education aren't antithetical concepts—they're twin civic values that have evolved in tandem throughout the history of the republic.