Workers, and Labor Strategy, on the Move as Goods Transport Industry Spreads Out 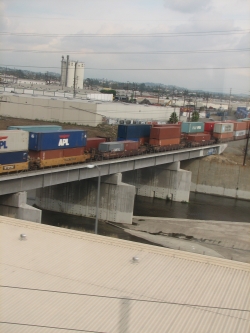 “We’re a migratory species…from the moment a four-legged creature crawled out of the bog and went looking for food and shelter,” said Jeffrey Kaye, author of Moving Millions: How Coyote Capitalism Fuels Global Immigration, speaking at Moving Forward Together, The Impact Project’s international conference on goods movement in Carson, Calif., last weekend.

Since at least the Industrial Revolution, the instinct to migrate in search of better opportunity has been driven largely by jobs or ways to earn a living. In recent decades massive global migration has been driven largely by the globalization of trade and capital. In many cases globalization—including imbalanced trade and international currency manipulation—has made life in developing countries unsustainable. Witness the dumping of cheap subsidized U.S. corn in Mexico in the 1990s, resulting in suddenly uncompetitive Mexican farmers pushing north.

As discussed in numerous workshops at The Impact Project conference, diesel emissions and other side effects of the trucks, trains, ships, railyards, warehouses and ports essential to a sprawling global economy create serious health problems for those who live closest to this infrastructure.

For example, the largely Latino immigrant residents of Wilmington, right near the ports of L.A. and Long Beach; or San Bernardino, Calif. and Joliet, Ill.—inland communities where goods from the ports are staged in massive warehouse complexes.

Kaye points out the cruel irony that the communities most directly impacted by global “goods movement” bringing the fruits of global trade to the U.S. are often the very same ones who were uprooted from their native lands by globalization. Many in these communities rely on global goods movement for jobs, which are typically low-paying and through temporary staffing agencies.

From these transitory warehouse jobs to well-paying union longshore work, goods movement industry has largely operated on the assumption that there is an endless supply of available workers—and few or no concessions to workers need be made.

After vulnerabilities revealed, a movement inland?

But Sheheryar Kaoosji of the Inland Empire, Calif.-based group Warehouse Workers United noted that the vulnerability of the global transport industry to disruptions in labor has been revealed during the last decade. In 2002, the ocean off the coast of California was dotted with container ships unable to access ports for more than a week as union longshoremen were locked out during contentious contract negotiations. The lockout cost an estimated $2 billion a day in ripple economic effects. A shortage of dockworkers in 2004, caused by an unanticipated spike in U.S. consumption and snafus in the rail system, also tied up the ports and affected industries nationwide.

Kaoosji said Wal-Mart and other major retailers took these two incidents as a sign they should not rely too heavily on the west coast or any one geographic locale in getting their goods from China to U.S. stores. A growing movement for emissions controls at west coast ports, led by the ports of L.A. and Long Beach, also made things more complicated for industry.

Not coincidentally, Kaoosji said, around this time more containers were shipped to Gulf coast and East coast ports. “This happened because labor (on the west coast) organized and because we were organizing on environmental issues,” he said.

The ongoing Panama Canal expansion will allow the passage of more and larger ships, which will make it easier for more goods from China to reach U.S. ports on the Gulf of Mexico and East coasts. That means these ports are expanding, as are affiliated inland distribution hubs, with significant government subsidies. These ports are generally represented by the International Longshoremen's Association (ILA), a much less active and less democratic union than the west coast International Longshore and Warehouse Union (ILWU). Hence any major shift in port work from the West to East and Gulf coasts could be seen as a setback for organized longshoremen nationally.

Kaoosji said that the expansion and restructuring of the U.S. goods movement industry will also mean more distribution centers (essentially massive warehouse complexes where products are stored for relatively short amounts of time before being disbursed upon demand to stores) in inland hubs in places like Kansas and Ohio which haven’t previously been major trade routes.

“So we’ll see communities with no understanding of how the industry works getting facilities dumped in there quickly with public money,” said Kaoosji, who with Warehouse Workers United is part of a burgeoning national movement also including Warehouse Workers for Justice in the Chicago area.

“We need to connect with these folks who are inland and help them understand the industry before it’s too late. We have to remember we’re organizing in a global industry. If we push down on them in one place, they will come up in another.”