‘Voting for a Paycheck’: How the Right’s Narrative Trumps Workers’ Interests 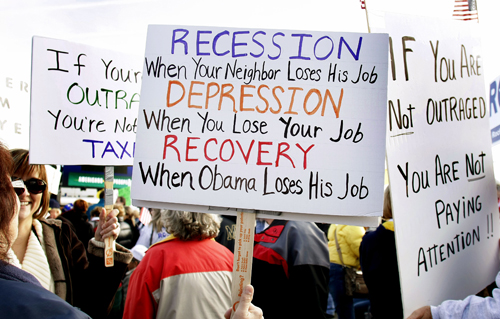 "Voting for a Paycheck"—a front-page Milwaukee Journal Sentinel article largely built around a Tea Party rally in my hometown of Racine, Wis. where unemployment peaked at 16.7% earlier this year—drove home a critical lesson for labor in today's elections.

The lesson: working people cannot effectively fight for their political interests in the absence of media that can actively help the voting public decode the torrent of deceptive messages pouring out from the Right's massive media  echo chamber.

How else can you describe a situation where the public is incessantly told that all the experts expect them to reject Democrats because of their insufficient progress in curing massive unemployment? Why is there virtually no analysis of why voters would consider Republican candidates and policies that have already proven devastating to their most basic economic self-interest?

WHAT IMAGES DOMINATE THE NEWS?

While the media have largely been devoid of images of empty factories, boarded-up storefronts, and Wall Street billionaires, we have seen endless shots of fired-up Republicans and Tea Partiers eager to swallow the entire Kool-Aid pitcher by voting for GOP candidates sworn to attacking their economic self-interests.

Thus, we return to the notion of "voting for a paycheck." The underlying message, as reflected in the giant front-page photo of a mother and daughter at a Tea Party rally, seemed to be that economic anxiety just naturally translates into votes for Republican candidates.

After all, the cautiously-moving Obama administration hasn't solved the massive unemployment.  Why let Obama and them keep spending our money? Doesn't it make sense to push out the Democrats and bring back the Republicans' policies? Doesn't choosing the Republicans mean "voting for a paycheck"?

The notion that this approach might intensify rather than cure our economic problems is seemingly never asked--either in this article nor countless others-- in response to the predicted Republican electoral surge.

Basic questions like, "What happens if the Republicans cut off your unemployment check?" are rarely discussed in the corporate media, even though Republicans have already blocked extended unemployment benefits repeatedly.

The "Voting for a Paycheck" article breathlessly reports that "Racine County has become a hotbed for the anti-tax tea party movement, which has galvanized conservatives." The hotbed was not exactly rocking for an Oct. 29  rally headlined by two of the very biggest names associated with the Tea Party movement, Grover Norquist of Americans for Tax Reform and Tim Phillips, president of Americans for Prosperity, taking part in the "Spending Revolt National Bus Tour."

The low-energy event produced only "between 50 and 60 people, including organizers and campaign workers" in a city of 82,000. But the rally dominated the story focused on a depressed industrial city desperate for "J.O.B.S.," as a sub-head put it.

The article thus featured several declarations of support for Tea Party-style Republicans: "The ones I vote for promise to reduce the size of government and repeal Obamacare," the woman in the large photo stated. The piece also quoted a jobless 47-year-old worker who voted for Obama in 2008, but was unsure if he was even going to vote Nov. 2. "I blame Wisconsin, the state government, the high taxes," the worker stated. There was no follow-up question on the dubious connection between "high taxes" and the lack of jobs.

While the Spending Revolt rally in Racine may have been a dismal failure, it should not blind us to the Right's spectacular success in promoting a simplistic but cohesive narrative on the ongoing Great Recession, as voiced by the unemployed former Obama voter. This narrative has been repeated endlessly with the untold millions spent by the US Chamber of Commerce, Karl Rove's American Crossroads GPS, and other corporate entities. And it has taken root.

The narrative can be encapsulated in the following series of myths.
Unfortunately, the truth in each case is much more complex to
explain, especially when the major media have so neglected the key facts about the causes and consequences of the economic meltdown that began late on Bush's watch:

1) Obama's increase in spending for the bank and auto bailouts, plus
the stimulus, have dangerously increased our deficit.  The Wall
Street and auto bailouts were actually begun under the George W.
Bush administration (although Obama unwisely continued the largely
unconditional nature of the bailouts, like not forcing GM and
Chrysler to re-invest in the US). The massive deficits began to soar under
Bush, to Obama, as Robert Freeman explains:

the Congressional Budget Office estimates Bush's cumulative ten-year deficit at $2.3 trillion, to be sure, a breathtaking shortfall from the $5.6 trillion surplus he inherited from Clinton.

But as with the yearly number, this one ignores the [Social Security] trust fund sleight of hand, an omission of some $2.4 trillion. When this is added back in, Bush's ten year deficit leaps to $4.7 trillion, $10.3 trillion short of Clinton's number.

2) Obama's stimulus has accomplished nothing. Look at the
all the people still unemployed.

The net economic effect of the Troubled Asset Recovery Program and Obama's stimulus was to prevent the recession from spiraling into a full-blown Great Depression II. A study by Moody.com economist Mark Zandi, a former advisor to John McCain's campaign, and Princeton Prof. Alan Blinder estimated that an additional 8.5 million jobs would have been lost without these programs.

The non-partisan Congressional Budget Office estimated that the stimulus program  increased the number of full-time equivalent jobs by 2 million to 4.8 million, compared with what would have happened without the stimulus.

Prior to the stimulus program, the US was regularly hemorrhaging jobs at the rate of  700,000 to 800,000 per month,  according to the Economic Policy Institute. The US has recorded nine straight months of small
private-sector job growth. However, unemployment remains at 9.6%.

As is now clear, the stimulus turned out to be far too small to  end
the recession, but the Republicans resisted every dime of what Obama managed to allocate.

3) If we cut taxes, we will cut the deficit. If the government has
less to spend, than it will spend less and stop padding the
government payroll.

This myth is a Trojan Horse designed to conceal tax cuts for the richest 2% which are due to run out at the end of this year. In fact, continuing the tax cuts for families earning more than $500,000 will  add  considerably to the deficit, as the Washington Post notes. The Republicans want to:

permanently extend an array of expiring tax breaks that would deprive the Treasury of more than $4 trillion over the next decade, nearly doubling projected deficits over that period unless dramatic spending cuts are made.

As for federal jobs, they have already declined by several hundred thousand under Obama, as Paul Krugman has reported.

4) If we cut taxes, we will also be freeing up more capital for
investment and job creation. Cutting taxes means jobs.

Actually, cutting government spending destroys jobs, as it eliminates government positions that in turn wipe out consumer demand and jobs at grocery stores, hardware stores, and auto plants, and on and on.

Nobel-Prize-winning economist Paul Krugman has classically shattered the myth of tax cuts as a stimulant during a recession:

… those parts of the private sector not burdened by high levels of debt see little reason to increase spending. Corporations are flush with cash — but why expand when so much of the capacity they already have is sitting idle? …Nobody in the private sector is willing to
fill the hole created by the debt overhang.

Thus, every piece of this compelling but superficial Republican/Tea
Party narrative is dead wrong.  But no alternative narrative nor any
aggressive economic program has emerged to challenge the Right's
fairy-tale version of the economy.

Describing how present-day politics are used to reinforce a steady upward re-distribution of wealth, Prof. Paul Pierson, co-author of the important new book Winner Take-All Politics, explains that the well-organized, richest 1% have the resources to endlessly propagate messages that reinforce their stranglehold on America's resources.

Meanwhile, those making up the bottom 80% of America's citizenry not only lack organizations with comparable political resources but also do not have access to reliable information on the impact of policy proposals:

It’s a contest between those who are organized, who can really monitor what government is doing in a very complicated world and bring pressure effectively to bear on politicians.

Voters in that kind of system are at a disadvantage when there aren’t reliable, organized groups representing them that have clout and can effectively communicate to them what is going on.

The corporate media's utter neglect of their responsibility to help the reader develop informed political judgments has been particularly appalling this election season. While some papers provide minute "fact-checking" analysis of political ads, they ceaselessly repeat themes of the Right without the slightest probing.