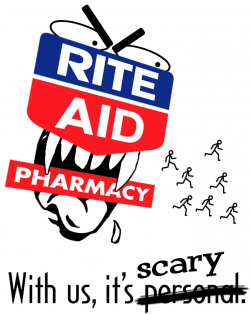 On the Friday before Halloween, college students in eight cities greeted Rite Aid's customers with leaflets describing the "Sweatshop House of Horrors" for workers at the country's third-largest retail drugstore chain.

Rite Aid executives recently proposed a new scheme in Lancaster that would overcharge employees for their share of healthcare insurance – forcing workers to pay up to 28 times more than the company's increased cost for a worker's share of insurance.

Another by-product of the ILWU's campaign is an emerging coalition of all the Rite Aid unions.

Where Rite Aid store employees are unionized, their unions -- UFCW and 1199 -- report major problems with management on all kinds of contract issues. It must be even worse at the not-yet-union stores, because one of the consistent themes in the USAS chapter report backs was the positive response that students got from many Rite Aid workers and even a few managers.

A student in Palo Alto commented that she'd "never seen retail workers so supportive of a campaign, even if they feared active support could jeopardize their jobs." When students went inside the store in Los Angeles to give the store manager their letter, "He agreed with everything we said and told us he'd relay our message up to headquarters," the local USAS organizer reported.