Native and African-American Farmers Finally Get Their Due 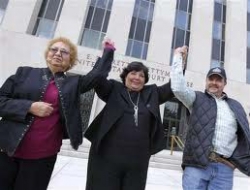 Long-awaited settlements and payouts lauded, but some losses can't be repaid

Black and Native American farmers have finally secured victory in a major civil rights battle that has lasted years.

Last Friday, the Senate agreed to settle and payout $4.5 billion over claims of discrimination in lending practices, government mismanagement and access to the U.S. subsidy program for farmers.

The bill related to the Pigford II case came to the Senate floor ten times  before it was finally approved. “Black farmers have died at the plow, you know, waiting for this justice to happen,” John Boyd, president of the National Black Farmers Association told NPR.

Plaintiffs Marilyn and George Keepseagle are Native American ranchers and residents of the Ft. Yates, N.D. They were members of the Sioux Nation on Standing Rock Reservation.

Their suit alleged that the group was denied the same opportunities as white farmers to obtain low interest loans from the USDA. Congress mandates that the USDA is the “lender of last resort” for family farmers who can’t get credit from commercial banks. But Native farmers couldn't get loans.

Last month, Agriculture Secretary Tom Vilsack and Attorney General Eric Holder announced a settlement had been reached. Under the settlement, $3.4 billion will be made available to eligible class members to compensate them for their discrimination claims.

“This settlement marks a major turning point in the important relationship between Native Americans, our Nation’s first farmers and ranchers, and the USDA,” lead attorney Joseph M. Sellars said.

But not everyone agrees.

"The telling will be in the next phase of the settlement,” Clayton Brascoupe, program director of Traditional Native American Farmers Association, told In These Times. “There is a process. They (the federal government) can draw that process out as long as they want. Farmers and ranchers are still going to bear the burden of proof.”

For the family of Luke Crasco, 66, of the Ft. Belknap nation in Montana, the victory is bittersweet. Crasco, one of the original plaintiffs, lived long enough to learn that the case had been settled and heard about it from his hospital bed.

As The Billings Gazette reported, Crasco lay in the hospital bed while his family read news of the settlement to him. “His eyes popped open and his eyebrows raised,” his widow Irene told the Gazette. “He knew he had won.”

Crasco stated in his lawsuit that officials told him, “Why don’t you Indians just go back to Ft. Belknap and borrow money there? That’s where you belong. You Indians are always getting things for free.”

Loss is about more than money

In addition to the monetary award, the agreement provides up to $80 million in debt forgiveness to successful claimants with outstanding USDA Farm Loan program debt.

Included is a moratorium on foreclosures on most of the claimant’s farms until they have gone through the claims processor or until the Secretary of Agriculture has been informed that the claim was denied.

It also includes broad relief for the farmers through various programs.

Said Senator Harry Reid in a statement according to The Hill, “I am hearted that Democrats and Republicans were able to come together to deliver the settlement that these men and women deserve for the discrimination and mismanagement they faced in the past.”

A report prepared by a former USDA economist states that Native Americans suffered actual economic losses amounting to $776 million between 1981 and 2007 as a result of receiving less than their fair share of credit opportunities from the USDA, according to Farm And Ranch Guide.

It incorporates the cultural part too — things being grown are the things necessary to continue to function as a culture. Specific types of crops to continue a lot of the ceremonies, different types of corn, each one with a specific function or use.

A lot of communities still grow tobacco that is used for ceremony, the more ancient varieties. Even when communities have feasts, a lot of the foods served you can only get from those fields. You can’t buy them at the grocery store. That’s a part of it.

Most of the farmers were looking for the capital to use for purchasing equipment such as tractors, hay mowers, irrigation equipment, livestock, says Brascoupe. “if you don’t have access to that type of capital either your farm may fold or stay stagnant and then fold.”

“If your father or grandfather is farming and needs input of capital to make it flourish and to pass this legacy on to their children or grandchildren and it languishes and doesn’t get transferred, the younger generation finds something else to do.That, to me, disrupts a cultural pattern."