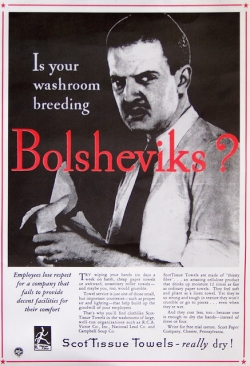 Norweigian bosses have become obsessed with a new way of scrutinizing the bottom line. According to a new report by the Parat trade union, increasing numbers of employers are imposing "tyranical toilet rules" in an attempt to limit the number of workers attending to bodily functions on company time.

One unnamed company requires women to wear read braclets while they are menstruating to excuse "extra" trips to the restroom, according to a section of the report quoted in the Daily Mail: 'Women quite justifiably feel humiliated by being tagged in this way, so that all their colleagues are aware of this intimate detail of their private life.'

According the report, 66% of managers make employees ask for permission to access the facilities with electronic key cards so that their breaks can be monitored. The report identified three companies using video surveillance to monitor bathroom traffic. Some firms favor a lower-tech approach, asking workers to sign in to a "guest book" before doing their business.

The report is now in the hands of a government agency known as the Norwegian Consumer Council or Forbrukerrådet. (Bathroom reading?)

It's not clear why the union took the report to an agency tasked with protecting consumers, as opposed to workers. Maybe because the Consumer Council's mission is based on United Nations' eight core consumer values, one of which is, "All consumers have the right to satisfaction of basic needs."

Lest Americans feel smug about our allegedly superior bathroom rights at work, it should be noted that some American workers are still fighting for access to sanitary facilities and even the right to drink water on the job.

In January, the Equal Employment Opportunity Commission filed suit against Giumarra, a California agricultural congomerate that markets products under the brand name "Nature's Partner." The company is facing a separate lawsuit from workers who allege that they were denied bathroom breaks and even fresh water while working for hours in triple-digit heat.

The plight of Norwegian workers in scarlet letter bracelets made headlines around the world. Their struggle became an instant metaphor for corporate greed trumping worker dignity. Let's hope this spirit of solidarity can extend to workers everywhere. One of the basic principles or organizing is focusing on what we all have in common. Let's face it, everybody has to go sometimes.