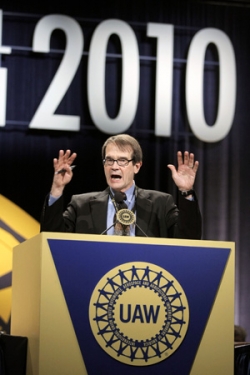 UAW President Bob King sparked outraged among progressives and the labor movement by endorsing the Korea Free Trade Agreement. The Economic Policy Institute estimates that the treaty as proposed this year by the Obama administration will cost 159,000 American jobs over the next five years. (Editor's note: See clarification below.)

Blogger Jane Hamsher of Fire Dog Lake criticized King, writing that "by choosing to endorse this agreement, which includes many of the provisions that have led to massive manufacturing job losses under NAFTA and CAFTA, King once again demonstrates that the UAW has become a Chinese-style union: much closer to the interests of management and the government than those of its line workers."

Yesterday, I interviewed UAW President Bob King at length, who dismissed many of Hamsher's claims as merely an attempt to grab headlines. King said, "I'm very supportive of the agreement because it really protects UAW members. ... It opens up the Korean market to 75,000 American cars a year, and it has protections against import surges."

King was quick to dismiss Hamsher as having very little experience in the labor movement and on trade deals. I asked King about Global Watch Trade Watch Director Lori Wallach, one of the key organizers of the 1999 WTO protests and a veteran trade organizer with over 20 years of experience fighting NAFTA-style trade deals.   Wallach had been critical of the UAW deal. In response to an inquiry by In These Times, Wallach wrote:

The UAW described how eliminating truck and auto tariffs would result in a new flood of American job-killing imports, but the new deal does not stop this, it only pushed it back five years for cars and 7 years for trucks. So, imports will go up but as far as boosting U.S. exports, the main change was an agreement that 75,000 U.S. cars could be allowed into Korea without meeting Korean safety standards. But that only translates into jobs if Koreans decide to buy U.S. cars so the waiver can be used. The UAW has long warned how only 4% of cars in Korea are imports and that in 2009 the United States exported just 5,878 cars to Korea, while importing 476,833 vehicles from Korea.

The UAW rightly savaged Bush's deal as a "free trade agreement not just with Korea, but with the entire region" because it only requires 35% U.S. or Korean content for a vehicle to get duty free treatment and would now allow Korea to refund its manufacturers for tariffs on parts from China for cars being sent here. But not one word was changed to the job-killing "rule of origin" or the "duty drawback" refunds. This means that even if more U.S. cars were sold in Korea under the agreement, U.S. workers would not be making the steel, auto parts and tires because 65% of the value could come from Mexico and China and that Korean cars coming here could include a majority of Chinese content undercutting U.S. cars.

King countered that the deal was not perfect; there were many things he objected to about the agreement. However, King added that, "It was important to endorse in order to reward the administration for its good behavior of including labor in negotiations."

Taking a stab at the criticism leveled by Hamsher and Wallach, King said, "Lori Wallach and Jane Hamsher don't have the responsibility of representing real workers so they have the freedom to be opposed to this deal on philosophical grounds."

But does Bob King really represent real workers? The UAW has a long track record of suppressing the voices of the workers they represent. According to Al Benchich, retired president UAW Local 909, "the UAW Administration Caucus is the one-party state that controls the UAW at the International level. Every International officer is a member of the Caucus, and they surround themselves with appointed international reps that unquestioningly do their bidding."

King's own election as UAW President was marked by the suppression of rank and file voices. King did not allow resolutions by his own members from the floor at his nominating convention. Delegate’s briefcases were even searched for flyers supporting opposition candidates before they entered the union hall.

Under King's rule, the UAW International leadership has attempted to force local unions to accept concessionary contracts negotiated without them at UAW Local 23 at the GM Metal Fab plant in Indianapolis and UAW Local 5960 for members from the GM Lake Orion plant in Michigan.

I asked King why he could claim he was representing workers since he proclaimed his support for the trade deal within a few hours of its announcement. King claimed he was able to endorse it quickly because it was consistent with the policies of the UAW. Wallach was quick to produce an eight page document showing where the Korea Free Trade Agreement was inconsistent with UAW policy on 16 different points.

I asked King why he rushed to make the decision when Steelworkers President Leo Gerard, a union with a much more democratic tradition, was taking days to consult his membership before making a decision. Gerard is taking the early part of this week to meet with his International Executive Board in Pittsburgh and consider all the options on the table.

Gerard's decision to endorse the matter has been complicated by the UAW endorsement. I spoke with a political director of another manufacturing union who said, "Typically, we would just flat out blast the treaty, but we do so much joint bargaining with the UAW. We figure with UAW support, the treaty is more likely to pass. Why endanger the joint bargaining we are doing with the UAW?"

King's decision to quickly endorse the Korea Free Trade Agreement has indeed made it more difficult for unions who "have the responsibility of representing workers" to represent the interests of their members. According to Politico, the AFL-CIO has drafted a statement, but has held the statement as a result of the UAW's support for the treaty.

Matt McKinnon, the Political Director of the Machinist Union (IAM), in a closed door meeting at the AFL-CIO, claimed King and the UAW threw every other union under the bus. Firedoglake reports that McKinnon also denounced the deal as a "yellow-belly flip-flop" representing a slap in the face from the White House that will be the end of the UAW. In Politico, McKinnon reiterated his opposition to UAW support of the Korea Free Trade Agreement saying, "This doesn’t pass the laugh test."

When I asked King why the UAW decided to endorse the treaty without consulting others unions he said, "We were on a tight deadline to endorse. If we wanted to be relevant, we needed to weigh in right away with an endorsement."

Hopefully, the union president's decision to remain relevant by endorsing the treaty does not make the labor movement more irrelevant as a force of independent political power.