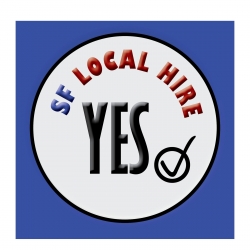 A historic local hiring ordinance is on the verge of passing in San Francisco.

On Tuesday San Francisco City supervisors voted to mandate that city-funded construction projects hire a certain percent of local residents, or face consequences. The bill amends the current San Francisco law that relies only on “good faith” efforts by contractors to ensure that half their workforce is local.

The ordinance is being sehttp://www.inthesetimes.com/working/edit/6754/local_hiring_ordinance_nears_passage/en as one of the most aggressive local hiring mandates in the nation, after Cleveland. Introduced by Supervisor John Avalos and approved 8-3, it requires 20 percent local hiring the first year, with an increase of 5 percent each year until it reaches 50 percent by year seven.

“I am not saying this legislation will not cost money,” said Avalos a meeting of the Budget & Finance Committee. “I am saying that the costs of doing nothing far out weigh the cost of otherwise.” According to San Francisco Office of Economic Analysis it would cost San Francisco an extra $9.3 million a year in contracting costs to meet a 50 percent local hire rate.

If we want to do the cheapest thing possible, then we do nothing at all, and we have to live with the consequences. But I would say what we had to live with recently in terms of high unemployment and the misery and harm that does to our communities is not something that is tolerable here in San Francisco. I can't ignore the 44,500 unemployed people. This legislation will not help all of them, but it is a start.

“It’s a good start,” says Willie Ratcliff, editor of SF Bay View, a community newspaper based in San Francisco’s Bayview District – where the unemployment rate dwarfs that of other parts of the city. (thought to be 50 percent higher)

“Right now people are having a real hard time making a living here, “ Ratcliff told Working In These Times. “This is long overdue, but it’s just a first step. We’ve got to do the same thing in contracting local disadvantaged businesses here in San Francisco as well.”

He added, “People of color have been pretty well locked out in hiring and contracting in this city. It’s not good for our budget or good for people trying to pay their bills.”

What I’ve seen in the last 20 years is a lot of people of color put to work in the trades in the unions — that’s a success story. But in the last five years these people who were taken off the street and kept out of trouble and have bought homes in neighborhood are all in jeopardy. They are not being hired for these local jobs. It’s a tragedy to see them unemployed when there’s so much work in San Francisco.

With local hiring at an all-time low, workers lined up behind the ordinance. Billions of dollars in future capital projects are planned for San Francisco.

Over the last year, tensions at construction sites in San Francisco have risen to the point where contractors have been alarmed about work stoppages and labor unrest.

James Richards of Aboriginal Blackmen United, a Bayview-based group that stages protests and other actions when its laborers miss out on work on public projects told the SF Weekly “We have qualified union workers standing outside the job site who are ready, willing and able to work.”

Several years ago, City College of San Francisco’s Mission Campus construction was a flashpoint when scores of local workers picketed in front of the site because they were not being hired. In fact, only 21 percent were local hires, and 79 percent did not reside in San Francisco, according to a report, “The Failure of Good Faith” by the Chinese for Affirmative Action and the Brightline Defense Project

The bigger picture, as outlined in the report, shows only 24 percent of city work hours are filled by city residents in 29 projects surveyed by the organizations. The numbers are from workforce data from 29 public infrastructure projects in the City over the past seven years.

Other examples in the report include the Laguna Honda Hospital project where 79 percent of the workers lived out of the area, while 21 percent were San Francisco residents. For the Transbay Temporary Terminal, only 13 percent were local hires. An astounding 87 percent of the work was done by those who did not live in San Francisco. The list goes on.

The report also documents that African Americans are severely underrepresented in infrastructure workforce projects. For example, in work at San Francisco International Airport, only 6 percent were African American. Four percent were Asian/Pacific islanders. Latinos and whites comprised most of the workers.

At the Transbay Temporary Terminal, African Americans were 5 percent of the workforce; Asians were at 9 percent, and again, Latinos and whites constituted the majority of the workforce.

Over the next decade $27 billion will be invested by San Francisco for public infrastructure projects. Thousands of jobs will be created. That’s 2.5 billion dollars a year for the next 10 years on public works construction.

The board takes its final vote next Tuesday, then awaits the signature of outgoing Mayor Gavin Newsom.

Said Avalos, “Probably the most important economic effect of local hire on our economy is the spending effect. San Francisco residents employed here will spend more of their wages and salary here compared to commuters from Bay Area communities, whose paychecks leave with them when they go back to their own communities.”