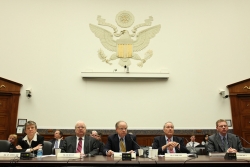 The AMA's Guides to the Evaluation of Permanent Disability is the most widely-used handbook for assessing work-related injuries in the United States. Many state workers' compensation programs are legally required to use the book, as I wrote in an earlier Working In These Times post. The AMA has been publishing the Guides since 1958. The sixth and latest edition, published in late 2007, has been described by both its promoters and its detractors as a "radical" departure from previous editions, a "paradigm shift." Why, after 50 years, did the publishers break with all that had gone before?

One of the most controversial changes is that disability ratings for many injuries are lower in the sixth edition than in the fifth. That means that workers with the same injury will get less compensation if they are assessed under the new rules.

The AMA is a private professional organization which is not accountable to the public. Yet many states are locked into using the Guides by law. This arrangement effectively creates a monopoly for the AMA, which sells the books and support materials on its website. The guide itself sells for $189.00, the transition guide to the guide is $79.95, and the bimonthly Guides newsletter is $200.00—discounts for AMA members, of course.

The latest edition of the Guides was compiled in near secrecy. When a task force of the Iowa Division of Workers' Compensation requested a list of the authors of the chapters in the sixth edition, the AMA declined to provide the information.

The AMA provided Working In These Times with a list of chapter authors. However, a spokesperson for the AMA ignored repeated questions about whether the organization has any policies in place to prevent conflicts of interest.

The list confirms what many have suspected all along: One physician in particular, Dr. Christopher Brigham, has played an outsized role in the development of the Sixth Edition. In addition to being the sixth edition's senior contributing editor, he is listed as a co-author of five of the book's seventeen chapters (including the controversial chapter on spinal injuries). Brigham is also a member of the advisory committee that is supposed to provide oversight for the Guides. We asked the AMA who else sits on the advisory committee, but we didn't get an answer.

Iowa Workers’ Compensation Commissioner Christopher Godfrey testified last month before the the House Education & Labor Committee about the findings of a task force his agency struck in 2008 to investigate the forces that shaped the Sixth Edition. After interviewing many of the principles involved in the making of the book, including Brigham himself, and several of his co-authors, the task force concluded that Brigham exerted outsized influence on a process that was supposed to be consensus-based.

Information shared with Task Force members suggests that much of the construction of the book and assignment of impairment values was not the result of a consensus at all as much as it was the work of one person, Dr. Christopher Brigham.

Ultimately, the task force voted 7-1 against adopting the sixth edition in Iowa.

Brigham likes to point out that he doesn't get paid to do all this work on the sixth edition.

He makes his living as the Chairman of Impairment Resources, LLC, a joint venture with the Insurance Recovery Group, which bills itself as "a national leader in workers’ compensation recovery and cost containment systems, having recovered more than $900 million on behalf of its clients." Impairment Resources characterizes itself as follows in a 2009 press release marking the launch of the joint venture:

Impairment Resources will combine the expertise and resources of national leaders in the areas of the AMA Guides to the Evaluation of Permanent Impairment, workers’ compensation cost containment, and recovery services. It will offer a proprietary suite of new cost containment services to address monetary payouts for impairment, key cost drivers in workers’ compensation cases.

In other words, Brigham's real job is to drive down workers' compensation settlements.

Brigham travels around the country giving lectures about how the vast majority of impairment assessments are wrong. In 2009, he told an insurance industry symposium that over 75% of workers’ compensation physical impairment ratings are incorrect because "doctors are not held accountable." During the same presentation, Dr. Brigham said he sees many workers' comp doctors who are “self-fulfilling prophets of doom and attorneys who use their clients as pawns.”

In 2006, Brigham published an article in a trade publication for defense lawyers claiming that 80% of impairment ratings based on the fifth edition were wrong and 89% of the mistakes exaggerated the worker's level of impairment.

These figures are not derived from the peer-reviewed scientific literature. They are based on an analysis that Brigham's company performed on records from its own database. The cases were submitted by clients seeking second opinions.

Even Brigham acknowledges that his sample should not be considered representative. Clients are probably more likely to send in assessments that they already believe to be flawed. It should be noted that the company caters to defense attorneys for insurance companies and self-insured employers who want to challenge workers' compensation settlements.

It probably shouldn't surprise us that Brigham's company's hand-picked experts disagreed with the outside doctors 80% of the time. The experts are declaring disability ratings exagerated without examining the patients in questions. The original doctors are not given an opportunity to defend their interpretations.

Brigham argues that the error rate is high because doctors don't know how to use the fifth edition of Guides. The process is simply too complicated and tedious for mere medical doctors, he maintains. Brigham was a reviewer and a member of the advisory committee for the fifth edition, too. Somehow he got asked back after signing off on a book that he deems to be virtually unusuable.

Ironically, the sixth edition is vastly more complicated and difficult to use than its predecessor, so much so that professional medical examiners charge more for sixth edition ratings because of the extra time involved.

Doctors are advised to complete 35-40 hours of independent study, or a full-day workshop before even attempting to use the sixth edition. Did we mention that Impairment Resources, LLC sells training?

The convoluted story of the sixth edition of the Guides shows how foolish lawmakers were to outsource such an important document to private interests.