On Workers’ Christmas List: An End to Wage Theft 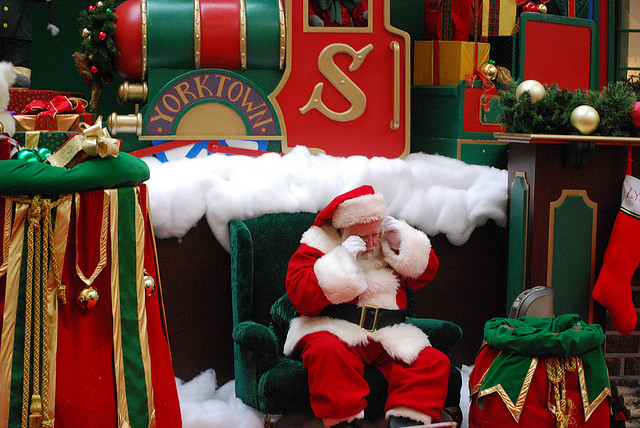 Those smiling Santa Clauses seen in malls, airports and other public places during December always look inviting and jolly. But being a Santa is actually quite demanding and sometimes risky, as Santas in busy locations meet an assembly-line quantity of children per hour while dealing with angry and stressed-out parents, teenagers who throw things at them and crying or even peeing kids.

The average mall Santa sees more than 10,000 kids each season, working long hours with few breaks. While some trained, long-time Santas make $5,000 up to $20,000 for a six-week stint, the majority make around minimum wage, according to “Confessions of a Mall Santa":

In the quest for good throughput at malls (a high rate of kid-on-the-knee per hour) every Noerr Santa (from a corporate service that provides Santas in 37 states) learns how to be picture perfect in the face of grueling hours, frightened children, and malcontent parents. They also learn about how to lift children and where to keep their hands (always in sight to stave off icky potential litigation issues).

Santa impersonators are among the thousands of workers hired for temporary positions during the holiday season, when employers including retail stores, warehouses, delivery companies and many other related industries take on seasonal hires to facilitate the rush of gift-shopping that is a mainstay of the country’s entire economy—representing a quarter to half of all retail sales.

Though the season is supposed to be about generosity and cheer, workers rights groups warn that it is a high-risk time for wage theft, which is especially prevalent among though by no means limited to temporary jobs of the type that proliferate during the holidays.

As journalist Claire Bushey wrote recently for Crain’s Chicago Business, as many as 70 percent of workers in certain industries report experiencing wage theft. Hotel, construction, restaurant and warehouse workers are among those most affected, but retail and “white collar” administrative workers are also at risk.

In many cases employees are cheated of their wages by subcontracted companies which are likely to have temporary contracts and can be hard to hold accountable as they frequently go out of business or have limited liability and assets. Larger employers benefit from the rock-bottom prices offered by these subcontractors, but are often not held responsible for labor violations including wage theft by these same subcontractors.

Temporary holiday workers are in many cases hired by such subcontracted temporary staffing firms. Pursuing a wage theft claim from a seasonal holiday job would be especially difficult and unlikely for most workers, as they may have trouble even tracking down the firm that hired them by the time the wage theft has become clear.

But in general, Bushey reports, wage theft lawsuits are on the rise, which may mean an increase in abuses and/or increased advocacy for victims:

Lawsuits filed in federal court in Chicago alleging some violation of the Fair Labor Standards Act, the law that mandates minimum wage and overtime payments, are up 49% since 2005 and 134% since 2000. The local increase mirrors a national rise in wage-and-hour lawsuits.

In 2009, the country's top 10 largest wage-and-hour settlements jumped 44% to about $364 million, according to a report published by Chicago-based employer-side law firm Seyfarth Shaw LLP. Each side characterizes the issue differently: Employer attorneys say the plaintiffs' bar has discovered wage-and-hour violations and has cashed in; employee attorneys say workers are discovering that their rights have been violated all along.

If a lawsuit is filed and decided in employees’ favor, the worst that usually happens is an employer must pay all or a portion of the wages they should have paid to start with. Bushey writes:

Management who has studied wage-and-hour enforcement, found that between 1998 and 2008, U.S. Department of Labor investigators fined repeat violators in only 43% of cases. When they did impose penalties, 32% of companies had their fines reduced.

Thanks in part to efforts by the Interfaith Worker Justice center, which released a holiday-season study on wage theft last month, the issue is gaining prominence among advocates, legislators and the general public. On The Huffington Post, David A. Love summarizes legislative efforts aimed at combating wage theft:

There are efforts afoot to get a Stop Wage Theft Bill through Congress. Further, Rep. George Miller (D-IL) introduced HR 3303, the Wage Theft Prevention Act. The legislation would amend the Fair Labor Standards Act and give the Department of Labor more power to protect workers. It would let workers file private lawsuits while the federal government is investigating a claim. And the Act would also eliminate the statute of limitations that forces the feds to resolve a wage complaint in two years.

As employers play Santa Claus and give employees hams and turkeys during the holidays, workers' rights advocates say, they should look hard at their subcontractors and supply chain and make sure that more importantly than receiving holiday gifts, employees are actually being paid the wages they are due all year long.