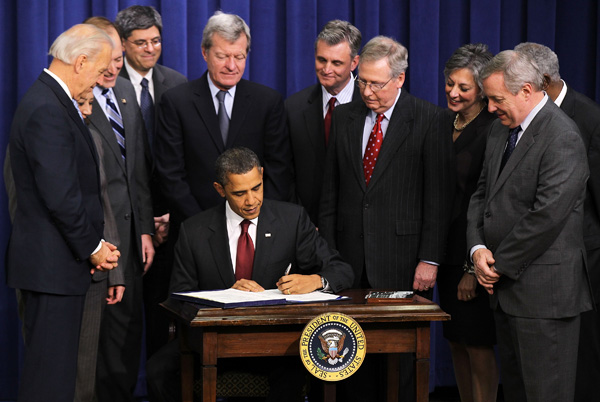 Get ready for more of the same failed "job creation" policies, enacted by an increasingly unified political eilte

But the Bush tax cut extension just passed by a political elite increasingly united on economic policy—a ‘Repo-Demo’ Party dominated by corporate interests—is only the first of three phases in a new policy offensive designed to protect the incomes of the wealthy and corporate America for another decade, to be paid for directly by middle- and working-class America. Together, the three phases represent the emerging U.S. variant of a general austerity strategy, similar in objective but different in content to other austerity programs now emerging as well in the Eurozone, Japan and elsewhere.

The second phase will likely be implemented in the next three months, before the ceiling on the federal debt has to be lifted. It will take the form of massive spending cuts in the U.S. budget, targeting Social Security and Medicare in particular. (A parallel draconian slash in spending will occur at the state level, targeting Medicaid and education).

Social Security has been a prime target since the Reagan years. Unable to cut it in the early 1980s, Reagan instead settled on a major increase in the payroll tax in 1984, creating a $2.5 trillion surplus over the last 25 years. However, that surplus was ‘borrowed’ every year by Congress to cover up in part U.S. budget deficits created annually since the 1980s to pay for war spending and tax cuts.

All that remains of the surplus in the Social Security Trust Fund are government IOUs promising to replace the shortfall when necessary—a replacement we’ll never see in our lifetimes.

In 2003, Bush II re-opened the attack on Social Security by trying to privatize it, but failed. Despite the accumulated surplus having been drained, Social Security was still annually producing a surplus and was thus financially too stable to convince the public it needed basic change. In contrast, today, as a result of a chronic three year long recession, there is no longer an annual surplus being created. Social Security is just breaking even.

But implementing the pending payroll tax cuts—part of Phase One—will finally put Social Security in the red, creating for the first time the net annual losses conservatives and corporate America have always needed to push a major gutting of the program. The payroll tax cut is thus the first move in what will prove a general attack on social security that will gain momentum in the coming months. Reagan conservatives have argued it would first be necessary to ‘starve the beast’ in order to dismantle it. For the first time, that scenario will exist.

Following the imminent draconian cuts in spending and Social Security-Medicare-Medicaid-Education about to take place in 2011, which lie at the heart of the second phase, the third phase of the new austerity strategy will follow in the summer of 2012. It will take the form of a fundamental revision of the U.S. tax code.

As part of this general revision, the Bush tax cuts will likely be made permanent for the rest of the decade to come. In addition, personal income tax brackets for the wealthiest households will be reduced to no more than three, possibly two, with a top rate for the wealthy or no more than 28%, representing a return to Reagan years.

For corporations, depreciation write-offs, a de facto investment tax credit for business, will be accelerated to full deductions in the first year—a measure already just enacted for small business this year. For multinational corporations, the foreign profits tax will be restructured to their advantage. The corporate tax rate will be significantly reduced or even phased out entirely. Not least, the new 2% cut in payroll taxes could also be extended, forcing yet another round of further reductions in Social Security and Medicare benefits and still higher co-pays for retirees.

To pay for the tax code rewrite and even more concessions to wealthy households, investors and corporations, the middle class will pay more. Adjustments to the Alternative Minimum Tax, AMT, for the middle class will be phased out. And the mortgage interest tax credit will be eliminated in stages as well.

Obama and the ‘Repo Demo’ Party have launched a PR offensive in the wake of the Bush tax cut extensions, proclaiming that the Bush tax cuts plus unemployment insurance extension plus payroll tax cut together amount to a ‘Stimulus 2’ package that will result in more economic growth and new jobs.

This is the same old tired song of the Bush administration. In fact, every one of the four major Bush tax cuts passed between 2001-04 was officially called ‘job creation’ bills.

The result of these ‘job bills’ was the weakest job creation following a recession of all the nine prior recessions since 1945. It took 46 months to recover jobs lost from January 2001, the start of Bush’s first recession. The second recession of the Bush II era, which started in December 2007, was followed by a  $168 billion stimulus bill passed in spring 2008—about $90 billion of which was tax cuts. The result: 4.5 million full-time jobs lost in 2008. Then another $787 billion stimulus in early 2009, Obama’s ‘Stimulus 1’ package—about half of which was tax cuts. The result: Another 6.5 million full time jobs lost in 2009. In 2010, another half million lost jobs and dropped out of the labor market. Of the 900,000 private sector jobs created in 2010, more than two thirds were part-time and temp jobs.

At the close of 2010, now we have yet another tax cut heavy ‘Stimulus 2’.  Again the claim is that it will create jobs. However, except for the payroll tax cut of $112 billion there is nothing ‘net new’ in the so-called ‘Stimulus 2.’ It’s the same old wine poured into same old bottles—just a new label slapped on the side and a brand new cork (payroll tax cut) added to the opening.

The key question: Will any jobs be created?

Corporations are today sitting on a cash hoard of more than $2 trillion, according to the business press, not investing or creating jobs. Why should increasing that hoard another $500 billion or so result in anything different? That’s the key question conservatives and the ‘Repo-Demo’ Party elite must answer—but are avoiding. That’s the question the media should be asking, but about which they remain conspicuously silent.

Only the $112 billion payroll tax reduction represents a ‘net new’ contribution to stimulus. But is it sufficient to generate jobs? Not by a long shot. For those earning $50,000 a year to the top payroll tax rate of $106,800 a year, the payroll tax cut will, on average, lead to no more than $20/week in real spending power after adjustments for partial saving, debt paydowns and what will be accelerating costs for food, healthcare, and gasoline coming in 2011. Those below $50,000 will actually have less to spend, since the “Make Work Pay” credit is ending for them. That’s nowhere nearly sufficient to stimulate the economy and create jobs.

The recent Bush tax cut extensions show the corporate-dominated political elite of both parties are now closing ranks as the economic crisis continues with no resolution for all but the wealthy and corporations. The ‘Repo-Demo’ Party, newly aligned around the same old failed policies, has just begun to do its work. Get ready for more of the same.

Jack Rasmus is the author of Epic Recession: Prelude to Global Depression, published in May 2010 by Pluto Press, Palgrave-Macmillan.