The State of Native America: Very Unemployed and Mostly Ignored 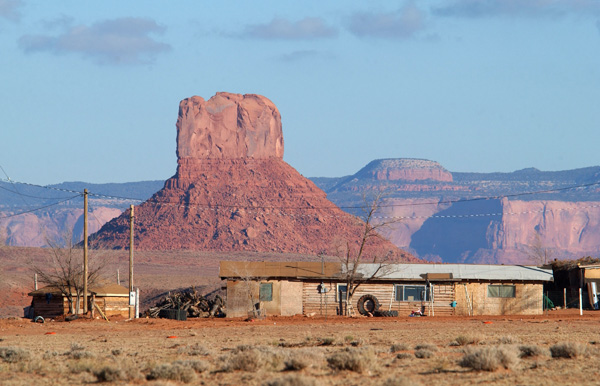 Homes north of Round Rock on the Navajo Indian Reservation in Arizona.   (Photo by DAVID MCNEW/Getty Images)

As the new year begins, it’s as good a time as any to look at a topic almost completely ignored by mainstream media: how Native American people are faring in the U.S. labor market. The economy and its paucity of jobs dominated U.S. headlines throughout 2010, but news media overlooked the particularly difficult experiences of native peoples.

In late November, the nonpartisan think tank Economic Policy Institute released a report looking at unemployment figures among American Indians. According to Algernon Austin of EPI, unemployment in Indian Country is bleak.

We find some of the largest disparities in employment between American Indians and whites in Alaska, the Northern Plains, and the Southwest.

These are also the regions of the country where the ratio of the Native to non-Native population is among the highest.

The unemployment numbers are different from those released by the Bureau of Indian Affairs Labor Force Report, whose sample and methodology is different than that used by EPI. The BIA bases its numbers on the American Indian and Alaska Native population that lives on or near the reservation and are eligible for BIA-funded services.

This population, however, according to Austin, is only about one-third of the total American Indian and Alaska Native population.

This year, President Obama made efforts to work toward building a better relationship with native people, ordering his administration to seek the advice of native people on the best ways that federal programs and policies could serve them.

In 2010, the Department of Labor's Employment and Training Administration’s Indian and Native American Program awarded $53 million to 178 grantees to provide employment and training services geared toward unemployed, under-employed and low-income Native American adults.

And it awarded an additional $13.8 million in grants to 78 tribes, tribal consortiums, and tribal nonprofit organizations to offer summer employment and training activities for native youth to offer basic and occupational skills training and job placement assistance.

As outlined in the 2010 White House Tribal Nations Conference Progress Report, Obama requested $55 million in his 2011 fiscal year budget for the Indian and Native American Program, which grants funding to tribes and Native American nonprofits to provide employment and training services to unemployed and low-income Native people.

That’s a 4-percent increase over fiscal year 2010. Whether it will be approved or not is another matter, of course.