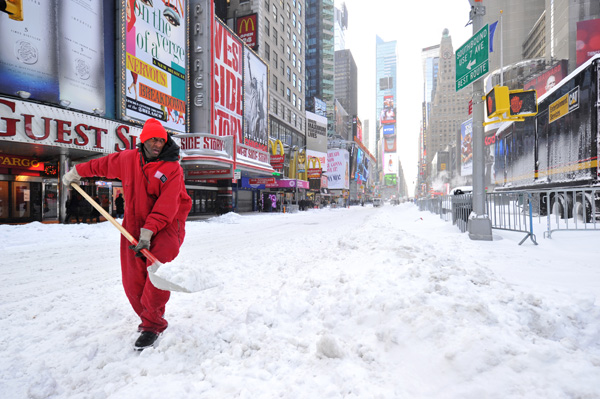 Left out in the cold: Conservatives say scheming unions—not bureaucratic incompetence—was behind the slow response to the recent snowstorm.   (Photo by STAN HONDA/AFP/Getty Images)

The disastrous blizzard that blasted across New York last week sent a chill through the city's workforce. Public employees were already reeling from hundreds of layoffs slated for New Year's Eve. Then came allegations that the failure of the clean-up effort were due to a “slowdown” led by disgruntled sanitation workers. And now newly inaugurated Governor Andrew Cuomo has demanded a wage freeze in the spirit of “shared sacrifice” (His share? Shaving five percent off his six-digit salary.)

Of course, the state's public sector unions have never gotten many warm fuzzies from Albany, especially as lawmakers struggle with a massive deficit. While he may take a hard line on public spending, it's unclear whether Cuomo will follow the lead of New Jersey Governor Chris Christie, who has postured himself as a vicious army of one against his own government. But nationwide, state legislatures, particularly those with resurgent conservative factions, are launching a frontal assault on the folks who drive the city bus, teach your kids, pick up your trash and supposedly rob you blind every tax day.

The sketchy allegations of snow-cleanup “sabotage” in the city's Sanitation Department, which are still under investigation, portend storm clouds of media smear aimed at public employee unions.

It all began, reportedly, when some anonymous civil servants approached conservative City Councilmember to make a troubling confession. Tea Party-backed Councilmember Dan Halloran, who proudly attacks bills for paid sick leave and living wages, claimed to the press, “three sanitation workers and two Department of Transportation supervisors came to his office saying their bosses ordered the slowdown, telling workers that 'the mayor will see how much he needs us' and 'there will be plenty of overtime.'”

The union denied the charges. The Mayor, who could arguably use a good diversion tactic amid heavy criticism of his administration's emergency preparedness, has called for further investigation. And the right has gone to town, using the botched clean-up as a platform to once again demonize the public sector. Because obviously, the city's poorly coordinated snow plows were a direct result of sanitation workers' lavish benefits and outsized public pensions, as opposed to just the administration's mismanagement. At City Journal, Nicole Gelinas argues, “the snowstorm has made it obvious that New York hasn’t perfected public-sector management to such an extent that it can cut spending to feed the benefits monster without harming the public.”

The blizzard narrative became that it's not tax cuts or layoffs that trigger state shortages and service crashes. It's the workers. Public Services fouled up? It must be public service workers' foul play.

Could the hailstorm of anti-labor rhetoric be a bellwether for backlash against the public workforce? Ask the students trudging through the slush this week to begin the semester under the controversial new schools chancellor, former media executive Cathie Black. She's poised to continue Bloomberg's agenda of antagonizing teacher unions by attacking tenure policies, while cheerleading the test-heavy, pro-charter “McEducation” model of school reform.

Federal employees and the AFGE union are getting left in the cold, too. Obama has proposed a wage freeze for federal workers, which ITT's Mike Elk likened to Reagan's PATCO fracas. While freezing wages isn't as harsh as unilaterally sacking critical airport personnel, the move may signal open season on civil servants in Washington's spurious hunt for “fiscal savings” (a myth debunked with various empirical studies.)

Dan La Botz writes at Labor Notes, “the move is pure political theater, in terms of reducing the federal deficit. The freeze would shave $5 billion by 2012 from a $1.3 trillion deficit—a minuscule 0.4 percent savings.” And even though public sector salaries may look substantial on average, he adds, there is vast inequality in the government payroll, “[ranging] from a VA nursing assistant making $28,000 up to Congress members’ $174,000 and beyond.”

Yet the disdain for public workers will probably grow as people's frustration with the stagnant economy snowballs. Since government workers symbolize the advantages that private employers have worked hard to destroy, such as strong union representation and guaranteed pensions, it's easy for politicians to stoke resentment toward selfish “bureaucrats” and deflect blame from the real hoarders of the country's wealth in the upper echelons of the corporate hierarchy.

With the right wing ascendancy in the last election, an all out war on unions—public and private—is on the horizon. Nationwide, the New York Times reports, legislatures will weigh anti-labor legislation to curb union organizing and political participation, at a time when Citizens United has blown open the spigot of corporate lucre flowing into GOP campaign coffers.

But is the lack of solidarity between public and private sector workers simply due to sly polemicizing by the right? Or are the leaders of large public unions, increasingly professionalized and detached from the rank and file, also responsible for losing touch with the raw populism that the Tea Party movement so rapidly co-opted?

New York's blizzard exposed the fractiousness of public perceptions of labor; a challenge that the city should have met with collectivity and compassion was manipulated to further divide struggling communities. City, state and federal workers face a battle of attrition, in which they must prove they're not just out to benefit their own members at everyone else's expense. In this hostile climate, the labor movement can't thwart negative stereotypes until it forges grassroots solidarity with a broader labor movement, including the workers who have an even harder slog this winter. That's a kind of “shared sacrifice” that is won not at the bargaining table in the statehouse, but out in the streets.