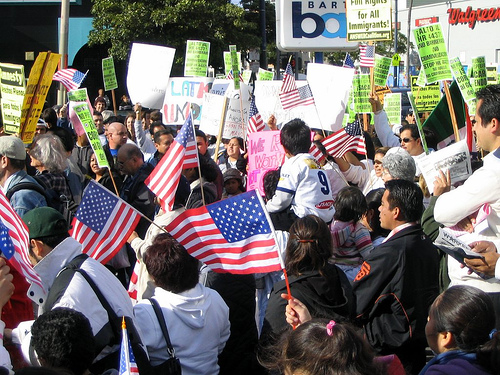 They may not burst into workplaces wielding guns and dogs, but the effects are no less devastating.

Immigration Customs Enforcement (ICE) is increasing immigration controls that have a serious impact on immigrants in the workplace using a different—and quieter—tactic. Recently, eight workers were arrested after they chained themselves together in an act of civil disobedience inside a Chipotle Mexican Grill restaurant in Minneapolis.

The action was part of a protest over the firing of between 350 to 700 immigrant workers from the restaurant chain’s 50 restaurants without notice in December. The workers were dismissed after ICE perused I-9 forms. Chipotle says each worker was given a chance to show documentation, and all dismissed employees were paid "promptly."

The strategy of “silent raids" avoids dramatic workplace raids, but still tightens the screw on workers. If paperwork is not in order, ICE demands that the employer fire the employee. Last year ICE conducted more than 2,200 I-9 audits. (There were 1,400 in 2009.)

In Los Angeles, ICE audits caused the layoffs of 253 workers at Overhill Farms. As reported on this website, American Apparel laid off 1,800 workers in 2009, many of whom had worked for the company for many years. ABM Janitorial company laid off 1,200 workers and SEIU members in Minneapolis, and Seattle Building Maintenance fired over 100 janitorial workers, they too were all SEIU members.

“Injustice for All” (PDF link), a report issued by Human Rights Immigrant Community Action Network, (a project of the National Network for Immigrant & Refugee Rights; NNIRR), states that these silent raids ignore workplace abuses and allow employers off the hook as long as they rid themselves of the undocumented workers.

The strategy has made workers more vulnerable to labor rights violations and other forms of abuse, the report says. The report includes 100 narratives by members of Human Rights Immigrant Community Action Network, (aka HURRICANE). Their stories stretch from the east to west, north to south, from the midwest to the southwest.

The report claims that ICE’s “new workplace strategy of auditing employment files, allowing employers to fire undocumented workers en masse” has not only deepened the economic and humanitarian crisis in communities, but has increased labor rights violations and abuses.

Many immigrant workers are reluctant to report worker abuses to police because of fear of deportation. They report being paid as low as $2 to $6 a day for a ten-hour workday in Southern California.

In New York City, the South Asian community contains the second largest number of undocumented people after Latinos. Desis Rising Up & Moving or DRUM is composed of South Asian workers in retail, restaurants, construction, domestic workers and taxi drivers who are organizing to better their working conditions. The organization was launched in 2009.

The report finds that among other things, some state and local governments are using the “illegal immigration problem” as a way to deal with their own fiscal problems. According to the report, “From Virginia to Oregon and Pennsylvania, ICE offers governments immigration jails as job creation and revenue source strategy.”

Different localities are approached to build and, at times, run public-private immigrant jails, “where investors will reap millions in profits [and] governments will boost their revenues.” 2010 was a record year for the detention of immigrants, the report states. In addition, almost 400,000 immigrant workers, students, women and youth, many long-time residents of the United States, were deported.

“Injustice for All” is the third human rights report issued by HURRICANE and is based on more than 100 incidents of violations and abuse. The findings are based on community-based tracking and human rights abuse reporting.

ICE deportations are also having a severe economic impact on communities and the economy, according to the Center for American Progress report “The Costs of Mass Deportation.”

Among its many recommendations, NNIRR/HURRICANE demands that employer sanctions should be repealed and E-Verify programs should be suspended, as well as expanding labor rights of all workers and increasing the Department of Labor inspectors.

"This enforcement-only agenda, with military-style raids as its centerpiece, may make for good PR, but it is ineffective policy. These raids terrorize communities, shutter businesses, and hurt our local economies. This enforcement-only model is not only unsustainable and inhumane, but also doesn't fix our broken immigration system."