Pushing Back Against Economic Crisis, Youth Unrest Ripples Around World 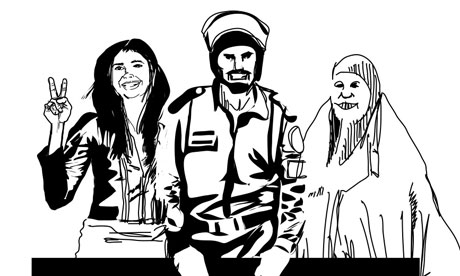 Has anyone noticed that new unemployment claims just climbed by 51,000 to 454,000? Maybe we're tired of being reminded about the jobless rate. It was politely ignored in President Obama's State of the Union Address, even as he promised to boost opportunities for the next generation.

Yet the next generation is at the center of unemployment epidemic. And according to the International Labour Organisation's Global Employment Trends report, they have lots of company around the world:

The number of unemployed stood at 205 million in 2010, essentially unchanged from the year earlier... with little hope for this figure to revert to pre-crisis levels in the near term.

The ranks of the jobless include some 78 million young people worldwide, a rate of 12.6 percent. That's a slight decline from the previous year but millions more than the 2007 levels. And since the data suggests “discouragement among youth has risen sharply," there is also the untold shadow number of youth who've simply fallen out of the workforce.

In some respects, the unemployment crisis has ironically done more relative damage to wealthier countries than to poorer ones; workers in upper-tier economies fell down harder. But whether unemployment reflects an abrupt decline from privilege, or a steady socioeconomic malaise, the millions of youth who can't find work are all hurting together. And the pain is now starting to crest in a ripple of anger.

This disaffection has afflicted rich and poor countries. American youth, even the college-educated, are increasingly frustrated to find the doors that opened for their parents a generation ago now shut firmly in their faces. In July 2010, unemployment in the youth labor force, aged 16 to 24, reached a jarring 19 percent, with especially high rates among blacks and Latinos. The combination of deferred dreams and lowered expectations has bred a sense of terminal stagnation among young workers. (Meanwhile, at the other end of the age spectrum, many older workers are clinging to their jobs for survival when they should be looking toward retirement).

The same story is unfolding with more vehemence in the Global South. It's no coincidence that the outbreak of youthful unrest in Tunisia, Egypt and Yemen, has emerged in regions embroiled in deep economic crisis.

The ILO reports that in the Middle East:

current estimates for 2010 show a level of unemployment at 10.3 per cent, which is the highest regional rate in the world. The youth unemployment rate is almost four times the adult rate. Gender inequalities continue to be a major concern, as the gap between male and female employment-to-population ratios, at 47.2 percentage points, is twice the global average. Economic growth in 2011 is projected at 5.1 per cent, falling short of precrisis trends, with little change expected in the region’s unemployment rate.

Although North Africa didn't suffer as much as other regions in the recession, the data depicts a deep long-term slump:

An alarming 23.6 per cent of economically active young people were unemployed in 2010. Productivity growth continues to be sluggish and leaves little scope for increases in wages and salaries or for progress in expanding social protection systems.

The Brookings Institution last year described a so-called youth “unemployment paradox,” in which declining unemployment “is paradoxically associated with a deterioration of job quality rather than any major improvement in labor market conditions.” It drew a striking comparison between the widespread youth joblessness Egypt and the United States:

The United States arrives at this juncture as a result of the worst economic recession in 70 years. Underemployment in Egypt, on the other hand, stems from a rapidly growing youth population faced with the consequences of a partial and fragmented transformation of the economy from a state-led to a market-oriented development model....

In all likelihood, the U.S. economy will resume its growth and will eventually start creating new jobs, but the high cost of health care and continued economic uncertainty may significantly slow the creation of good jobs. Like young Egyptians, young Americans may have to reduce their expectations about the quality of jobs they expect to attain in this current market and hope to upgrade over time.

What the report didn't predict, however, was a more radical reaction. The explosion of protest in Cairo shows that young people can only be forced to reduce their expectations so much, before they start pushing back and demanding revolution.

As one observer reflected in a Guardian dispatch, many protesters have:

made it clear that political opposition parties, long defunct and impotent, have been replaced by grassroots social action. Their fears of detention and torture have been supplanted by the need for better living conditions and better wages.

Will restless young people elsewhere follow? What about the American youth who face crumbling prospects for earning a living wage, much less finding their dream job? Or the young Europeans trapped between failed macroeconomic policies and a collapsed welfare state?

To help workers cope with the global crisis, the ILO urges governments to focus on creating quality jobs and strengthening social protections, instead of merely obsessing over deficits.

Echoing Brookings's warnings about long-term decline in job quality, ILO Director-General Juan Somavia argued, “We must not forget that for people the quality of work defines the quality of a society,”

The U.S. isn't yet on the cusp of a social breakdown, but its youth are moving into an era of unprecedented frustration. How long before they tire of letting their hopes suffocate—and join their peers around the world to organize and shake up the status quo?